source of picture above: http://www.ancientpages.com/2017/03/21/baffling-sanxingdui-civilization-why-did-these-people-have-fascination-for-eyes/

There is little known about the Sanxingdui culture which was contemporary to the Chinese Shang dynasty. It was a culture or a period of China which was never directly mentionned by Chinese historians and there are no written records to clarify its nature. The three archeological sites of Sanxingdui are located in and near the city of Guanghan at approximately 40 kilometers of Chengdu in the Sechuan province of China.

It is suggested though that the Sanxingdui culture is associated to and even might be part of the ancient kingdom of Shu (Thuc Quoc) dating from about 5,000 to 3,000 BC. Until the discovery of the ruins and artifacts of Sangxingdui which started in 1929 by a simple farmer and 1986 up to this day, the existence of the kingdom of Shu, whose starting date was at the neolithic era and which lasted some 2000 years was basically a legend. But today in Guanghan is located a museum entirely dedicated to this kingdom of China which is much more and actually represents a whole civilization by itself. As such China’s history just might be rewritten as we always knew about the Yellow River (Huang He) culture but also a little bit more about the Yangtze river culture represented by Sanxingdui. In fact some report like Task Rosen of the British Museum that he considers this discovery of artifacts even more important than the terra cota army of Xi’an.

According to the Jin’s Dynasty ” Chronicles of Huayang ” in 265-400 AD, the Shu Kingdom was founded by a certain ” Cancong ” who was described as having prodruting eyes. This prominent feature is found in several of of the figures of Sanxingdui. Most of the artifacts are radiocarbon dated as coming from the 12th to 11th century BC. As you can seen with some of the artifacts featured above and below the Sanxingdui culture was indeed fascinated with eyes. 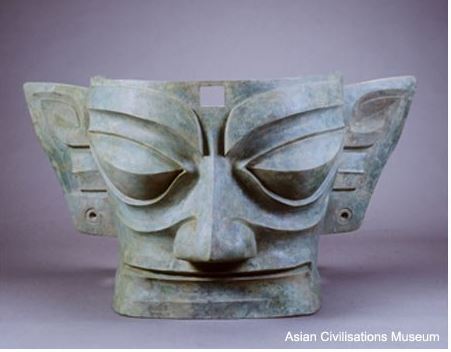 The walls of the city of the main city of the Sanxingdui culture were also found in 1996 and the archeologists estimate that it covered an area of about 12 square km making it the largest ancient Asian city ever discovered.

Most of these artifacts are at the Musum of Sanxingdui presently. It contains several thousands historical vestiges including six national treasures: a gigantic vertical statue in bronze, a mask in bronze with proeminent eyes, a gold cane, a large divine tree made out of bronze, a jade tablet with patterns describing primitive religious rituals and another jade tablet reflecting the high level of polishing and perforation of the time. The Museum also displays bronze statues of different height and style, several masks, birds and other animals all in bronze. There are about a total of 1,500 different pieces both large and small that were found in the three different sites and some of the best are being exhibited. 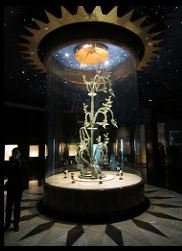 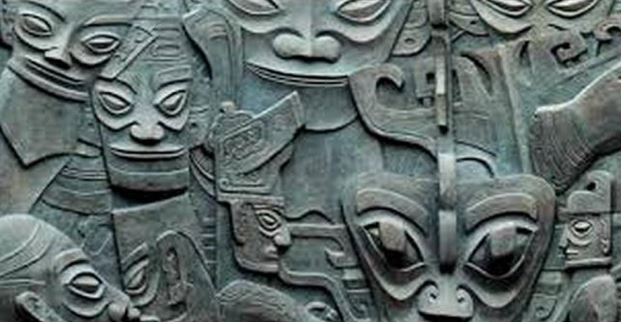 According to Dr Chen Fang-mei, a specialist of the Shang dynasty bronzes of Taiwan, we know that the Sanxingdui culture was very sophisticated. One of the statues found weighs an excess of 180 kg, meaning that it took about 10 tons of mineral to melt to make it. We can conclude then, that the population of Sanxingdui knew very well the techniques of temperature control, ventilation and melting otherwise it would have been impossible to achieve such a level and standard of quality.

The kingdom of Shu remains a mystery despite all these finds. The excavations revealed and substantiated its existence. Now the scientific circles divide the period of Shu in four periods: the first corresponds to the neolithic; the second where it flourished and extends to the Xia and Shang where the walls of the city of Shu were erected; the third corresponds to its age of gold near the end of the dynasty of Shang and the fourth where it declines near the Zhou dynasty. Although the objects found reveal a little bit of its history, there are still numerous questions that are still being asked. Where did these people of the kingdom of Sechuan come from? Who were they exactly? Why did they suddenly disappear? What was the source of that culture of the Yangtze? These questions are being asked because according to Chinese texts, the chinese civilisation emerges in the central plain around Anyang, the ancient capital of the Shang. In this traditional view of chinese history that is when Yu the Great (Dai Vu), the water tamer and the reputed founder of the mythical dynasty of the Xia, developed metallurgy in the valley of the Yellow River. With these texts, archeologists are under the obligation to reevaluate their ideas on the first developments of the Bronze Age as there were other civilization hotbeds just as original and contemporary of the Shang.

But contrary to the Shang artifacts found, the Sanxingdui had no written texts on any of their artifacts. With this, archeologists were almost forced to attribute to them a religious and sacrificial character. They justify this by drawing on a dense cluster of beliefs through all the masks, the hybrid creatures between men and beasts, the bird-men, the ritual objects found in the three different sites, and finally on the lack of ornaments and the state of the offerings deliberately destroyed and made unusable and definitely by the settlement of the earth from the embankment in several layers as if they wanted to seal the site for all times when the original inhabitants abandonned the sites. There are several explanations given for the migration of Sanxingdui such as an earthquake or war but nothing as been proven so far.

So thanks to Sanxingdui, the veil begins to rise on what are called the mysteries of Shu’s kingdom, that is to say its political particularities and its cultural legacy, which makes possible the study of its political organization, the evolution of its social fabric and its religious ideology. However, only time will completely be able to reassemble this age old puzzle.