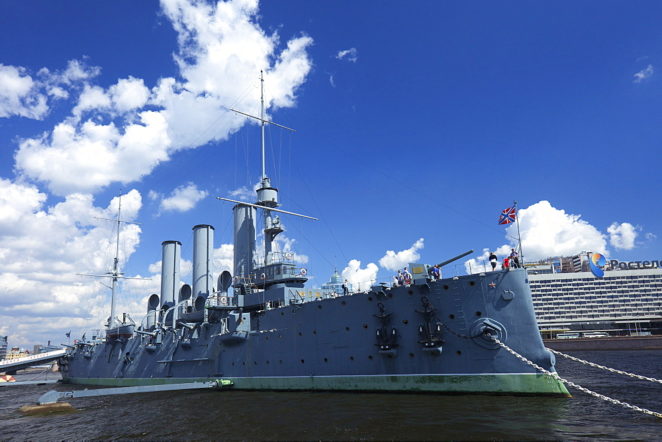 “Aurora”, the legend. A tireless witness to history. Not only because after almost 120 years old can sail, but also because it is probably the only ship in the world that is able to sail even though it was completely destroyed and sunk. “Aurora” is the beginning of the last century emerged from the shipyard in St. Petersburg, as a member of the Baltic Fleet, and the first task was the mission of the Pacific and the Russo-Japanese War. He participated in the First World War, and entered history when its sailors staged a revolt against imperial rule.

With the ship on 25 October 1917, fired a blank volley which marked the beginning of the gains of October or the beginning of the attack on the Winter Palace, now the largest museum complex “Hermitage”. Cruiser’s has suffered several breakdowns. During World War II it was shelled, destroyed and eventually submerged in the nearby port Lomonosov. However, it is drawn from the bottom of Neve and completely renovated in 1957 to become a museum. Since then forever anchored in Neva and keep it as an eye in the head. Last year, it came with a repair and, after more than a century the whole, it looks like new. “Aurora” is the holder of two medals. The museum has so far visited more than 30 million visitors.