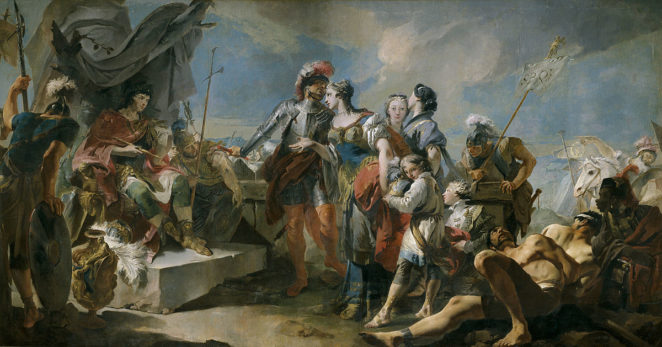 The reign of Aurelian as Emperor of Rome between September 270 and September 275 was a period during which some semblance of stability was restored to the empire, although chaos was to return as soon as this five years was over.

Lucius Domitius Aurelianus was born in the year 214 in Dacia (the western part of modern Romania). He was a cavalry commander who had distinguished himself during the reign of Emperor Gallienus. He seized power when Claudius II died of plague in January 270 and Claudius’s brother Quintillus committed suicide not long afterwards.

Aurelian was faced with several serious problems. One of these was the threat that the city of Rome faced from barbarian tribes in Italy. The struggle to evict them was a tough one, and it demonstrated the vulnerability that lay at the heart of the empire.

Aurelian therefore gave orders for the building of a huge defensive wall, parts of which can still be seen today. The Aurelian Wall stretched for 19 kilometres (12 miles), surrounding the whole city and therefore superseding the ancient Severan Wall (built in the 4th century BC) that only protected the city centre.  It was four metres thick and 6.5 metres high. It was punctuated by 18 gateways, protected by semicircular towers, and there was also a square tower every hundred feet along the wall. Although the construction was not complete by the end of Aurelian’s reign, it did the trick of dissuading barbarian invaders and it assured the Senate and people of Rome that their new emperor was someone who could be trusted to defend them.

Aurelian appreciated that defending the empire was always going to be a struggle, especially in the outlying provinces. He therefore took the step of relinquishing control of Dacia, despite this being his homeland. Dacia had been won back in the early 2nd century by Emperor Trajan, but its position on the far side of the River Danube would always make it difficult to defend.

Aurelian had to sort out the problem of Palmyra. This was a client kingdom, based on modern Syria, that had been a very effective buffer zone against the Sassanid Empire to the East. Palmyra had been ruled by a prince named Odaenathus and, after his murder, by his young widow Zenobia. Claudius II had made the mistake of antagonizing Zenobia, whose response had been to establish her own empire by invading lands that had formerly belonged to Rome, notably Asia Minor and Egypt. Aurelian’s task was to repair the damage.

Aurelian’s campaign was two-pronged, via both Egypt and Asia Minor, and victory was achieved fairly easily. Queen Zenobia was captured and what happened to her next is not completely clear. One account says that she died while being taken in chains to Rome, but another states that she was treated well by Aurelian and given a villa to live in. She is supposed to have remarried and that her descendants served as senators later in Rome’s history.

However, the capture of Zenobia did not pacify Palmyra.There were further revolts, and these were put down with great force, the city of Palmyra being sacked and looted so that it never again offered a threat to Rome.

Another longstanding trouble spot was Gaul, where Claudius has also failed to act decisively to exert control over a local ruler who sought too much independence for Rome’s liking. Battle was joined in 274 at Chalons-sur-Marne with Tetricus, the latest “Emperor of Gaul”. This was a strange battle, because Tetricus surrendered quite early on but his soldiers did not. There were therefore many unnecessary casualties, but Tetricus ended up being given a minor administrative post in southern Italy.

Aurelian had therefore solved Rome’s most pressing problems and all should have been well. However, his actions away from the campaign front were not so likely to win him universal acclaim.

For one thing, he took the extraordinary step of reviving the cult of the sun god Elagabal that had proved so disastrous when promoted by Emperor Elagabalus nearly 60 years previously. Palmyra was not far from Emesa (modern Homs) which was the centre of the cult, and after a battle near the site Aurelian claimed that he had received direct assistance in his victory from Elagabal.

Once back in Rome, Aurelian built a new temple for Elagabal, although he was renamed Sol Invictus (the Unconquered Sun), and decreed that he was to be Rome’s chief deity. For good measure, Aurelian also declared himself to be a god. He was the first Roman emperor to do this – it had always been the case in the past that emperors were declared gods by their successors.

Aurelian’s religious policy – of introducing a foreign god after claiming his aid during a battle – foreshadowed the far more momentous action of Constantine some 40 years later when Christianity became the empire’s official religion.

Perhaps Aurelian’s biggest mistake was to try to restore Rome’s economic fortunes by reforming the currency. This caused rampant inflation that led to violent rioting and would not be cured for decades.

It may have been unpopularity on the home front that gave rise to the plot that in turn led to his assassination. He was killed in Thrace in September 275 while on his way to begin another campaign, the plotters being members of his domestic staff aided by some of the Praetorian Guard.

Despite being over 60, Aurelian had not thought to nominate a successor as emperor – maybe he thought that even self-appointed gods were immortal. His assassins also had nobody in mind, so another period of chaos was inevitable.