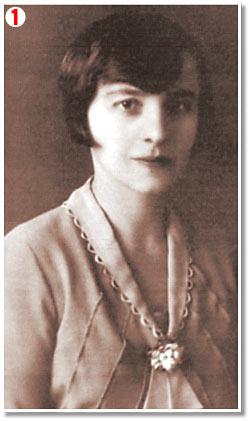 One of the most educated women in Serbia all the time. It belonged to the top of the intellectual circles outside our correspondence with Thomas Mann. U ,, Branko round ” printed his translation of Byron’s only 12 years old. Classical Philology ended in Vienna.

Among the first women members of PEN Club. Feminist, member of the International Federation of university-educated women. In 1921 she married Hassan Repca, then head of the Ministry of Religion in Belgrade. Soon he was removed from that place, and together they go to Skopje, to spread the idea of Yugoslavia. 1932 is a PhD in the Faculty of Philosophy in Belgrade still useful in many ways unsurpassed dissertation .

She hoped that she would fill the vacancy in the Department of Classical Philology, but encountered a warm welcome. Instead, gets a place in the Skopje high school, and teaches and elsewhere in Latin, German, French and Greek. After returning to Belgrade in 1941 and she and her husband are out of work; she gets a place in the women’s fourth high school, but soon moved to Sarajevo. 1946 finally became an associate professor at the Faculty of Philosophy.

Colleagues Milos Djuric and Milan Budimir, our otherwise highly respected classicists, not according to Anica Savić-Rebac relations with all due respect – because of her sex, or because of the freedom to marry a man of another religion, or political beliefs, or just because they felt threatened by its huge intellectual potential. At all times of the Faculty, has worked in the Women’s Antifascist Front (AFZ), the Association of Writers and SASA a. After the death of her husband committed suicide