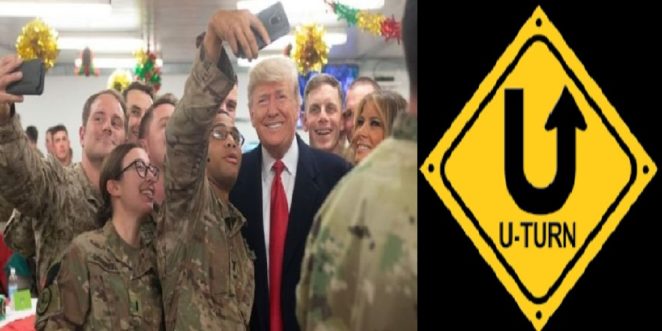 On the first sunrise of 2018, President Donald Trump gave the new Afghanistan-Pakistan policy, who had at least made a lot of trouble in this region. But how did it remain for their internal policies this year? Can he did that all from congress, which of the high promises they have done in the past two years?

Nothing like this happens in 2018 and the good performance in the November Democratic Party has made the situation more difficult for them. In this context, two important policies announced by them, the top positions of their administration have made ‘U-Turns’ in the past few days.

Military Withdrawal from Syria. Senior Republican Senator Lindsey Graham said that the US President Donald Trump is committed to ending Syria’s extremist organization, Daesh. He said that after the meeting with Trump on Sunday, he is now satisfied with the President’s commitment.

Be clear that President Trump surprised his allies and American establishment, when he ordered the withdrawal of two thousand American forces last week. The result of this surprising move was that Defense minister James Mattis and special representative Brett McGrick resigned, According to Lindsey Graham’s statement, after making this important decision, the Trump Administration realized that unlike the announcement the speed of the evacuation from Syria should be reduced.

President Trump and White House have not commented on this issue after the announcement of the withdrawal of American soldiers from Syria. The US Senators Lindsey Graham expressed concerns over their decision to call the US military back.

The President will make sure any withdrawal from Syria will be done in a fashion to ensure:

2) Iran doesn’t fill in the back end, and

3) our Kurdish allies are protected.