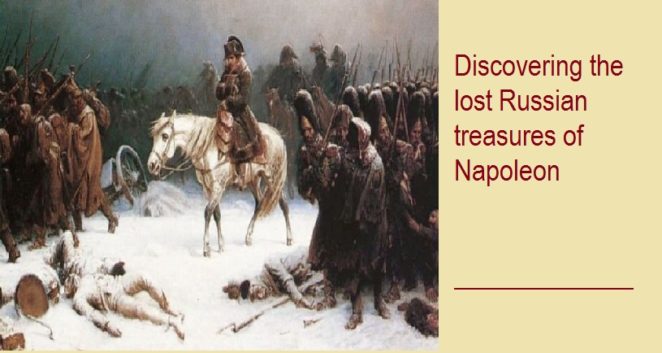 This rumor has been continuously circulating for two hundred years that Napoleon’s defeated military army took 80 tonnes of gold and other valuable items while escaping from Moscow. It is famous in Russia that the French emperor took a treasure with himself in Moscow in 1812 when he was defeated.

Many people are searching for this treasure, but now a Russian historian has introduced a new theory about it, that , Napoleon allegedly had stolen golden Bogie was not present at the place where it was under searched. Russian Scientist says, that those looking for treasure for two hundred years are searching in wrong place. They should focus their attention on the city named Radinia, which is near the border of Belarus.

During the journey of France upon returning , when conditions remained unchanged and difficulties increased, the property and value they had somewhere ditch in the ground.Until today it is not found, but Philip Day Sagar, who was part of the Napoleon’s staff, revealed that the treasury was drowned in the samuilovo lake, located in the Smolensk region.

It was pretty sure because the French army had left its arms and ammunition’s near the place. Since 1830 Russian officials and archaeologists , who have been searching for this  treasures, have failed to find it. But some historians say that the purpose of the statement of General Sagar was to drag focus only from the real position of treasury. and the possibilities of treasures near them are Barrizena, the river of Belarus. At this point, in 2012 a joint campaign of France and Belarus was also sent, which became failed.

Fascinating caravan :- The Russian scientist believe that Napoleon had sent a fake caravan to samuilovo Lake to betray Russian spies. While the Emperor and the Treasury were left towards the south and moved to radinia the lake called Bulichia ritawich, near it.

Vladimir Russian official says that every year many people bring them new ideas about treasury, but all ideas do not become a center of attention.