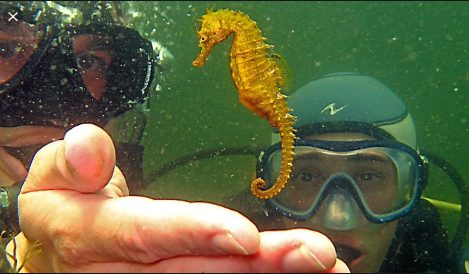 source of the photo above:  https://www.midilibre.fr/2019/07/09/fantastiques-animaux-marins-lhippocampe-de-thau-cheval-de-poche,8302932.php

In the Greek mythology the sea horse would pull on the chariots of the sea Greek Gods just like a horse on land. In the following picture you can see a vase with a picture of a sea horse dating back to the V1th century BC. 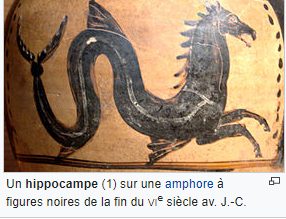 There are apparently about 50 types of this fish from the family Hippocampus. Their colors vary between each particular species of « hipposampes » up to about 200 of different types of colors. Their size vary between 9 in (22 cm) to 14 in (36 cm). Their cap or crown is as individual as our fingerprints.

The sea horses move vertically because of their dorsal fins that flap or flutter at about 20 Hz which is rather slow. The « hipposampes » live most of the time attached to seaweed by their prehinsile tail. They use their mouth as an aspirator or vaccum or maybe even a straw, waiting in ambush for small shellfish or crustaceans which they aspirate as they come along.

It is interesting to note that their is also an « hippocampe » in every human brain. In this context, the brain’s « hippocampe » is related to memory as it is the first part of the brain that is affected in Alzheimer’s disease. One of the reason that we have a « hippocampe » in our brain is because it has about the same shape as the real « hippocampe » of the sea. You can see this in the following picture. 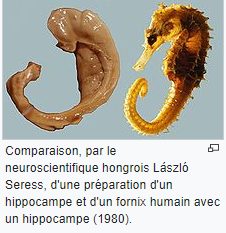 I really enjoyed personnally researching in French the challenge of this week. Hope you did too. Next week I will try to present another animal starting with I in French (Canadian variant).