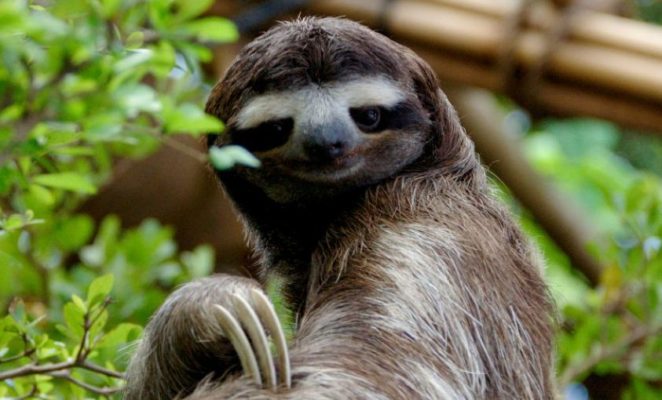 Source of the photo above:  http://www.slate.fr/story/119947/caca-paresseux-risquent-vie

Today I want to introduce you to an unusual animal that seems to be always smiling. This animal is called a sloth in English (associated with the word slow) but its French word also designs the sloth very well. So in French the sloth is called a « paresseux ». It is to be noted that the word « paresseux » is also an adjective meaning lazy in English. And that seems to describe a sloth perfectly although they are not lazy but just very slow moving and with an incredibly slow metabolism.

The sloth is a Central and South American animal found mostly in Costa Rica, Panama and Brazil. Being what they are called a « paresseux » they are considered an arboreal mammals in the same family Pilosa as anteaters. So definitely no, sloths are not monkeys. There are two types of sloths, the three toed sloths and the two-toed sloths. When we talk about this we are only talking about their forearm as each of these types have three toes on their back paws. Here are some interesting facts concerning the « paresseux ».

The sloth’s slowness is also its strength. A « paresseux » will only move about a distance of 40 meters (131 feet) per day at a rate of about 0,6 km (.37 miles) per hour and even then he becomes exhausted. As such the sloth sleeps about anywhere between 8 to 12 to 14 hours per day. The typical sloth weighs about 3 to 10 kilos (6.1 to 22 pounds) and measures 40 to 75 centimeters in length (15 to 30 inches long). With this slow movement and weight you would think that the sloths is endangered by predators such as the jaguars, pumas and even large birds but the fact that they can stay immobile for several hours is their advantage. They are hidden in trees almost all day and are virtually invisible. In fact the biggest threat to the sloths is humans who bring on deforestation, construction etc.

A « paresseux » lives in symbiosis with its environment. With this symbiosis comes the advantage of adopting another camouflage. A sloth will modify its brown fur with the help of bacteria and green algea. So its fur becomes almost green just like the foliage around him. In fact the algae ” Trichophilus Welckeri ” is found nowhere else but on the back of a sloth. 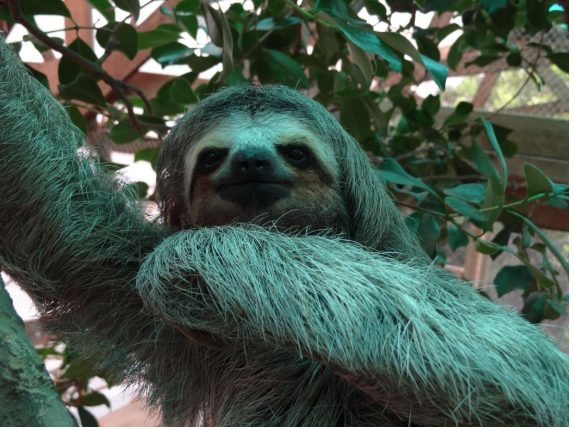 Once a week the « paresseux » will slowly go down its tree to defecate (make a number two). This is not a simple feat for a sloth to do: it can take him hours to go down that tree and then he defecates some very hard small stools. As a matter of fact, sloths have also been known to defecate every two weeks to even monthly. That is how slow their metabolism is…. Plus once on the ground, the sloth is again even more slow moving as he can only crawl at a very slow rate…

The only animal that seems to like the stools of a sloth is a butterfly named ” Cryptoses choloepi ” who lays its larvae only in the stools of a sloth. That same butterfly also uses the fur of a sloth for the same purpose and thus gives some nutriments to the organisms of the sloth that help with his camouflage. This double standard is also beneficial to the sloths as he will sometimes eat what he finds on his fur. So a sloth has his own personal pantry…

The sloth is also unique because it does not have the same amount of vertebrae as other mammals. It has anywhere between 5 to 8 vertebrae (mostly in odd numbers). Why this is, researchers have not able to clarify yet. With this particularity, a « paresseux » can rotate its neck and his head up to 270 degrees which is helpful when you do not like to move too much.

But even though very slow moving, a sloth, who can live anywhere between 30 to 50 years in trees, also exhibits an unusual behavior when it comes to water. In fact a sloth knows how to swim. Since a sloth is almost totally vegetarian, he uses his inflated stomach (filled with vegetarian gases) to float on water. With this means at his disposal a sloth moves much faster on water than on land. Also, with its very slow metabolism, a sloth can easily hold his breath under water for about 40 minutes… One of the reason a sloth will chose to travel on water is for reproduction purposes. About every one to two year, the urge to reproduce takes over and every sloth has to find his or her companion and water is a faster way to find them…

Another impressive characteristic of a « paresseux » is that it can live 90% of its life suspended upside down on a branch. This is because his internal organs are attached to his thoracic cage and thus do not compress his lungs and hamper his respirations (unlike humans). 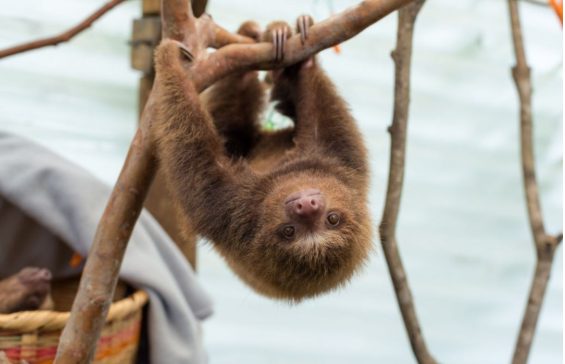 The term paresse (lazyness) comes from the old French « parece » or « peresce » from the 12th century. The pronunciation of the word « paresseux » starts with « par » or course but I am at a loss how to explain how to pronounce the rest of the word. Sorry about this.

So I hope you enjoyed meeting the « paresseux » aka sloth. See you soon for the letter Q.