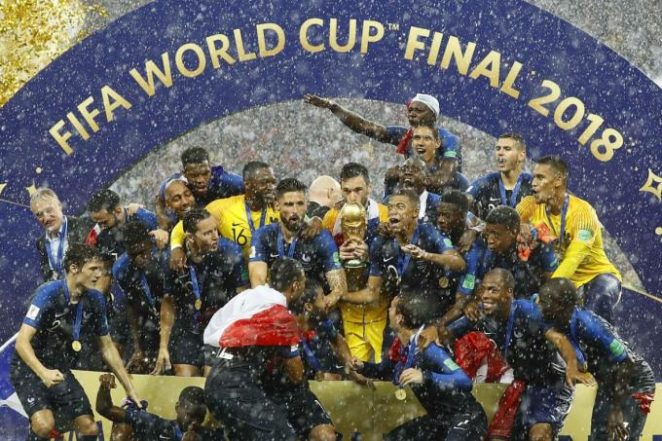 The World Cup dominated the sporting year of 2018 as France became the fourth European nation in a row to win the revered golden trophy, just the sixth country to win it more than once, Europe winning 12 to South America’s 9 now of the 21 so far. My team England made a credible semi final but beat four minnows to get there and losing to the three big teams they played that competition. The VAR reply system caused chaos in the early rounds that produced an absurd amount of penalties but officials backing off the use of it later in the tournament to calm things down some for the more pedantic offences.

Frenchman Kylian Mbappe is the sports new superstar and helped to push Messi down to 5th in the Balon de Oro World Footballer of the Year, even though the Argentine was top scorer in Europe’s top five leagues with 47 goals and 26 assist in 2018. Ronaldo was nudged into second by Luca Modric after his rape accusation, the first time the big two had not won it for 10 years. Three of the top five had a run in with either the taxman or the cops that year.

Cricket and England blew the chance to win the Champions Trophy held in England by producing a slow turning semi final pitch at Cardiff suited to the sub-continent teams, England duly losing and setting up a Pakistan v India final which some say was the plan all along to maximize world-wide TV revenue. The mercurial Pakistan team won by beating a very powerful Indian side. Batsman Virat Kohli dominated the sport in 2018 with 2,653 international runs at nearly a 70 average with ten hundreds, India winning their first test series in Australia for 30 year this month and Australia’s first white wash defeat at home for 76 years.

Snooker and Ronnie O’Sullivan is back, looking like he is going to win every tournament he plays, picking up a record 7th UK and Benson & Hedges Masters title this year. He has stopped messing about as he enters his legacy period, deep down determined to win 7 worlds to match Stephen Hendry’s numbers. Who knows, he may even get 8 now he is trying. By limiting the number of events he plays, he is dominating the sport but also enjoying some big rows with snookers boss Barry Hearn. Mark Williams produced the big shock of the year with his third World Championship in his mid 40s, stripping naked for the press conference, not a pretty sight.

Apart from the Premier League the Winter Olympics dominated the winter with South Korea delivering a fun Games, even with Kim Jong-ready to incinerate them. Russia were not allowed to compete under their flag due to mass drug abuse and so Norway surprisingly topping the medal table alongside Germany. Norway are also doping but politically we don’t go after them for some reason. GB took 5 medals.

Golf and the U.S. bossed the Majors with just Francesco Molinari winning one for Europe. It’s 11-5 to the USA over the last 16 majors. But Europe struck back by winning the Ryder Cup with relative ease, Phil Mickelson a bit of an embarrassment as Europe won by 17 to 10-and-a-half points in France. Fractious was not the word. But the highlight of the season was an emotional PGA Tour win for Tiger Woods, his first for five years, coming back from an horrendous injury that meant he could not walk properly for three months.  The crowd went mental when he won the end of season Tour Championship. He is now a contender once again and 2019 could be huge for him as he chases Jack Nicholas record of 18 Majors.

Tennis, like snooker, is seeing the old great players hang in there to keep winning Grand Slams. They just won’t let go. Andy Murrays career looks over due to injury but Roger Federer, Rafa Nadal and Djokovic won all four slams last year, as they always had , all well into their 30s and rolling back the years. Roger bagged his 6th Australian Open whilst Nadal claimed his 11th French Open in 13 years, the two he didn’t win in that 13 he was out with injury. Djokovic stormed back after 18 months in the wilderness with two slams, perhaps being weened off the ‘once’ legal drug Sharapova was on. Nothing else could explain his form collapse than the usual sport star infidelity.

Women’s slams and there were four different winners and nothing for Serene Williams, losing both of her finals. Serena remains one short of Margaret Courts record of 24, her embarrassing outburst in the US Open final against Osaka perhaps the beginning of the end for increasingly obnoxious America. Playing the woman, mom and race card beaus she was getting stuffed was embarrassing to the sport.

Manchester City dominated the English Premier League with 100 goals and 100 points. PSG, Barcelona and Bayern Munich again winning the other elite European leagues. Real Madrid won their third straight Champions League Final and five in a row for Spain, one away from matching England with six wins in a row in the 1970s and 80s. Leicester City lost their owner and three other lives to a helicopter crash, his wife and son lives saved by the fact his mistress was on the flight and so they publicly refused to travel with him this time. Jose Mourinhio was sacked at Manchester United after falling out with a group of the attacking players over tactics, headed by £90 million pound Paul Pogba.

Rugby Union and Ireland beat the All Blacks in Chicago and starting to look potential World Champions. England has a strong team but the players tiring of Coach Eddie Jones brutal methods.

The Philadelphia Eagles won a dramatic Superbowl by beating the all conquering New England Patriots 41-33 points as the game ebbed and flowed. It was NE 10th Superbowl and the Eagles first ever win from three attempts.