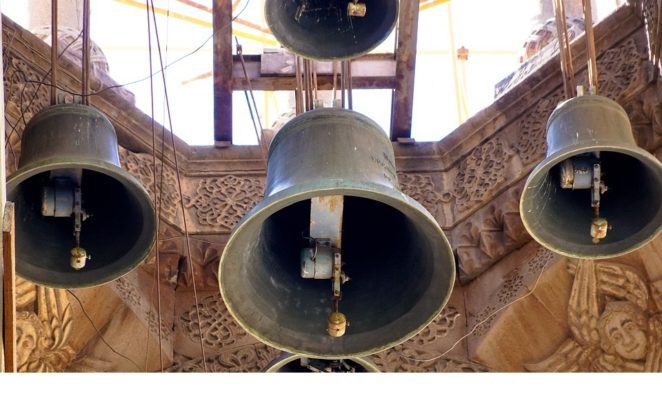 There are so many ways one can bring in the new year and one such is to listen to church bells that ring at the dot of twelve midnight.

We have a church closeby and we get to hear those sounds at regular intervals and more so on new year’s eve. I could not hear as I was fast asleeep At least in one place in the world, you can find thousands of smiling and peaceful people crowded together, no matter how cold the weather is outside. That would be on New Year’s Eve in Times Square in New York City watching a huge sparkling ball come down for a flagpole at One Times Square. This building is known as the New York Times Building, the New York Times Tower or just the Times Tower. It is a 25-story building with a 363-foot-high skyscraper. Let’s take a closer look at this New Year’s Eve tradition.

It all began way back in 1907 and the only years that this tradition was interrupted was in 1942 and 1943 when WW II put “dimout” restrictions on the city. Even though this brought less pleasure to the people they still gathered in Times Square to ring in the New Year so that they could offer a moment of silence to the fallen during the war. As of today that sparkling gem of a ball has dropped down in Times Square over 106 times. As incredible as it might seem this ball has gotten bigger and heavier. When it all started in 1907 the New Year’s Eve ball weighed 700 pounds. It then went through five different designs among them in the 1920s a wrought-iron ball weighing in at 400 pounds and from 1955 – 1998 an aluminum ball weighing 150 pounds. Today this ball weighs 11,875 pounds and has grown in diameter from 5 feet to 12 feet.

This New Year’s Eve ball is decorated with 2,688 Waterford crystals that were handmade in Ireland which give it its incredible sparkle.

The ball is lit up with 32,256 Philips Luxeon LED lights. These lights were first introduced in 2007 and they are able to create over 16 million colors and billions of kaleidoscopic patterns.

At this point, you might be wondering how much electricity is needed to power the New Year’s Eve ball. It is powered by 50,000 watts which is a relatively a small amount compared to the fact that it takes around 161 megawatts to light up all of Times Square.

Each day Times Square gets more than 300,000 pedestrians visiting it or just walking through.

On New Year’s Eve just to catch the entertainment and to see that majestic ball drop there were 500,000 people crowded into Times Square in 1998. It just increased in popularity as the one thing you definitely must do in your life at least once if possible. So today the estimated amount of people that flock to Times Square no matter what the weather and no matter how cold it is, is over one million.

Then of course while you’re crowded in among all those people you want to be sure you’ll get a good look at that ball when midnight comes so the estimated best spots to be standing are 43rd to 59th Streets at 7th Avenue and 43rd to 50th Streets at Broadway.

Of course, if your idea of New Year’s Eve fun is not standing in a huge crowd in Times Square you can party at home and watch the fun on TV. That means that people all around the world now have the opportunity to tune in and watch this tradition. Personally, I think it would be so much better seeing it on TV considering that you can be at a fun party or in the warmth and comfort of your home with delicious food and drink. Once midnight arrives and your eyes have been dazzled by that huge glittering ball and the New Year has arrived 3,000 pounds of confetti get blasted over your heads to complete the drop. So as you stand there all of this colored paper like snow in a blizzard comes falling down upon your head and over everyone else. To accomplish this 100 workers are needed and the confetti is dropped down from the tops of seven buildings which surround Times Square.

Of course if you choose to brave the crowds and see it all for yourself you have to take the weather into consideration. Once you are crowded in don’t expect anyone to make room for you to get out of Times Square. So let’s take a look at the pluses and the minuses. 1917 is considered to be the coldest ball drop with the temperatures being 1 degree F or -17 C.  Now that is really cold.

The New Year’s Eve ball gets raised to the top of the 77-foot flagpole at 6 PM. When the countdown to midnight begins it takes the ball just 60 seconds to descend and it is the start of a whole New Year.

When the crowds finally left Times Square after ringing in 2015 they left behind 48 tons of trash for the NYC sanitation workers to pick up. There was all of that confetti also balloons, party hats, pizza boxes and empty bottles.

Once Times Square is ready for clean-up it takes up to seven hours to put is back to order and reopen the streets to traffic. When 2016 arrived and the crowds had gone it took 178 sanitation workers with 26 mechanical sweepers, 25 collection trucks, 38 blows and 40 hand brooms to make the square look as it should look.

So if you ever have the urge to do something completely different on New Year’s Eve hop a plane to New York and find yourself a spot in Times Square. It just might be the experience of a lifetime.