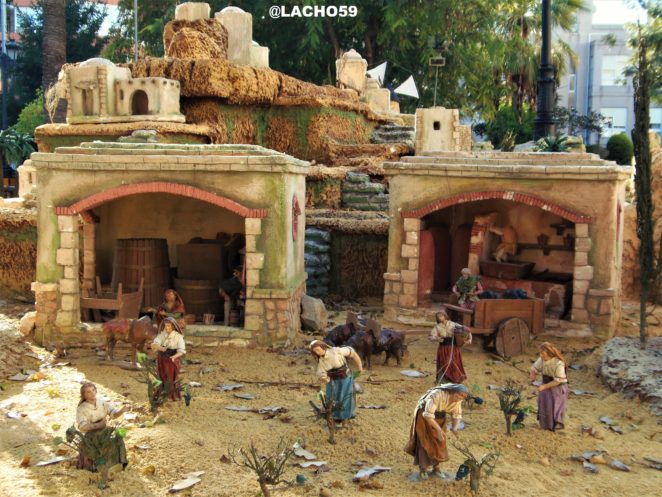 In Torrevieja, Spain, in the park, the city hall was recreated with figurines of the birth of Jesus in Bethlehem. Here is the whole city built with all the scenes. There are also included ones that tell about the history of Torrevieja and some of the city’s sights. Since the photos are very tomorrow I will still upload. The reason I leave them for tomorrow is that when the photos are more than 10 they are not being reviewed.

And now a little story about the birth of Jesus.

This beautiful woman is called Mary. She was an Israelite who lived in the city of Nazareth. God knew it was very good. So he sent his angel Gabriel to speak to her. Do you know what Gabriel has come to say? Let’s find out.

“Good day, you who have God’s favor! – said Gabriel. “Jehovah is with you.” Mary had never seen it before. She was frightened because she did not know what he meant. But Gabriel instantly calmed her.

“Do not be afraid, Maria,” he said. – Jehovah is very pleased with you. That’s why he’s going to do something great for you. Soon you will have a baby. And you will call him Jesus. “

Gabriel continued to explain, “This son will be great. He will be called the Son of the Most High. Jehovah will make him a king, as David. But Jesus will be king for ever and his kingdom will never end! “

“But how will this happen? Maria asked. – I’m not even married. I have not lived with a man, how can I have a baby? “

“God’s power will come upon you,” answered Gabriel. “Therefore the child will be called the son of God.” Then he said to Mary, “Remember your relative Elisabeth. People said she was very old to have children. But soon she will have a son. Here, you see that there is nothing God can not do. “

Mary immediately said, “I am the slave of Jehovah! Let him be with me as you said. “Then the angel went away.

Maria hurried to go to Elisabeth. When Elizabeth heard Mariana’s voice, the baby was joyful in her. Elisabeth was filled with God’s spirit and said to Mary, “You are especially blessed among women.” Mary stayed with Elisabeth for about three months and then returned to Nazareth.

Maria would have married a man called Joseph. But when Joseph realized Maria would have a baby, he decided not to marry her. Then one angel of God said, “Do not be afraid to take Maria for your wife. For it is God who gave her a son. “So Joseph and Mary married and waited for the birth of Jesus.