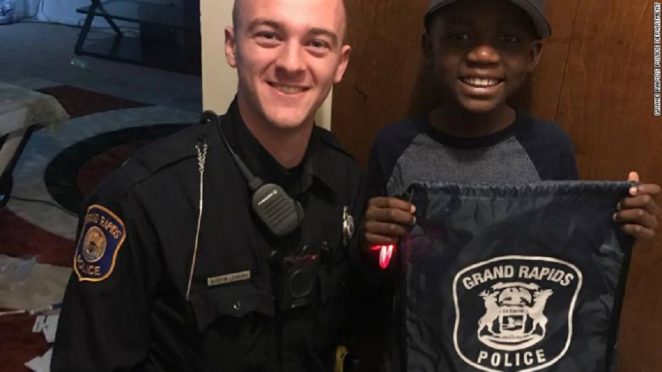 I will give credit where credit is due concerning Grand Rapids Police Officer Austin Lynema for living up to his oath to protect and serve people in his community who needed his help.

Thomas Daniel who despite being a young boy who wants to learn how to be all that he can be as a student who wants to be a success when he becomes an adult. he is one student that gets bullied by his fellow students who want to keep him down on the lower rung of the ladder.

Officer Lynema was on patrol when he saw Thomas crying because he missed the bus to take him to school. Officer Lynema offered Thomas a ride to school so he could learn new things at school that day.

This is what I like about Thomas. Instead of feeling sorry for himself that he is being bullied for trying to improve himself in life, he keeps on moving forward.

Since Thomas was as likeable as Peter Parker who is called “Bookworm” by football star Eugene “Flash” Thompson since Peter likes to hit the books while Flash is a football player who does not like a student like Peter to be better than he is in terms of being a genius student to his football stardom at Empire State University, Thomas would not have anyone in his school come to his birthday party.

When Officer Lynema found out that Thomas had no one to come to his birthday party, Officer Lynema and a few of his officers threw a birthday in honor of his new friend the next day.