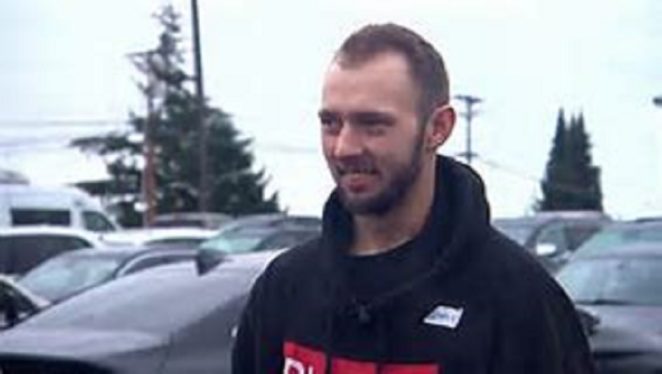 I am sure you heard of the saying “When one door closes, another door opens.” Case in point is when Travis Trent who was at the Good Samaritan Hospital in Puyallup Washington to attend the event where his girlfriend gave birth to a baby girl on Christmas Day.

What happened next to Trent when he went to start his automobile was that his auto began to get on fire. Trent who acted like a person who cares for the welfare of his fellow man, decided to get his burning auto out of the parking garage and drive it to a safe place away from the hospital parking lot.

Travis did what the authorities have gone on record not to do which is to drive an auto that was on fire to a safe place saving the other autos that were in the parking lot to go up in flames.

It is evident that Travis has guardian angels looking out for him as well as his family since Travis has a relative who works at the Sunset Auto Wholesale Dealership that heard about the loss of his auto and his brave act of thinking of other people in terms of safety concerning their autos being burned up as well as his auto.

The dealership presented Travis with another auto that matched his older auto free of charge. Travis who is a first time father and his girlfriend have named their first daughter Kennedy.

Travis was overcome with joy that a heroic act of getting his burning auto out of a danger zone along with the birth of his first child had a superb ending by getting a free auto from a dealership to ease the pain of losing an auto since the cause of the auto burning was an act that he did not have any control over.

Talk about having good karma on your side on Christmas Day. In the words of the song title of artist Roger Whittaker “The Life Of A Lucky Man.”