Born in Boston, Massachusetts, Winslow Homer was an American artist who was particularly known for his marine subjects in late 19th century American art. He was a master in sketching and watercolor which later led to painting with oil colors.

Winslow Homer was born into an old New England family. He was just six when the family moved to Cambridge, Massachusetts where he spent a happy childhood in a rural village. It was his mother, who was an amateur painter, that urged him to become artistic. At the age of 19, Homer began an apprenticeship in a lithographic firm in Boston.  At first, he just copied the designs of other artists but after some time passed he began drawing for publications like Ballou’s Pictorial and Harper’s Weekly. In 1859 he moved to New York City and began a career as a freelance illustrator. His first paintings were exhibited at the National Academy of Design. 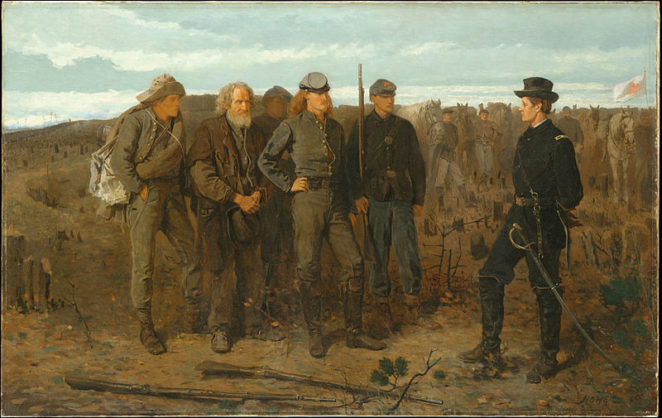 Even though Homer had a studio in New York City during the warm months he enjoyed traveling to places like Pennsylvania, the Hudson River Valley and around the New England states. He took a trip to France for a year in 1866. Upon returning to the states Homer painted scenes depicting happy times in such paintings as Long Branch, New Jersey and Snap the Whip.

Working with Watercolors and Oil Paints 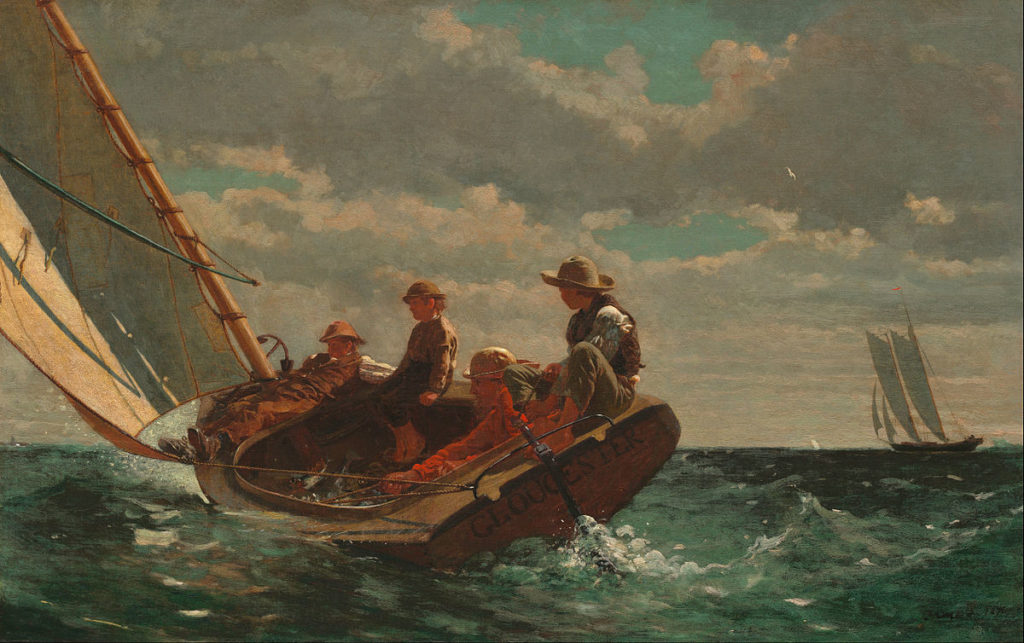 Homer began working with watercolors in 1873 which resulted in such paintings as Breezing Up (A Fair Wind). As time passed his oil paintings got larger and he liked to paint many women as single figures. In the late 1870s, he devoted his summers to direct painting in nature in watercolors. 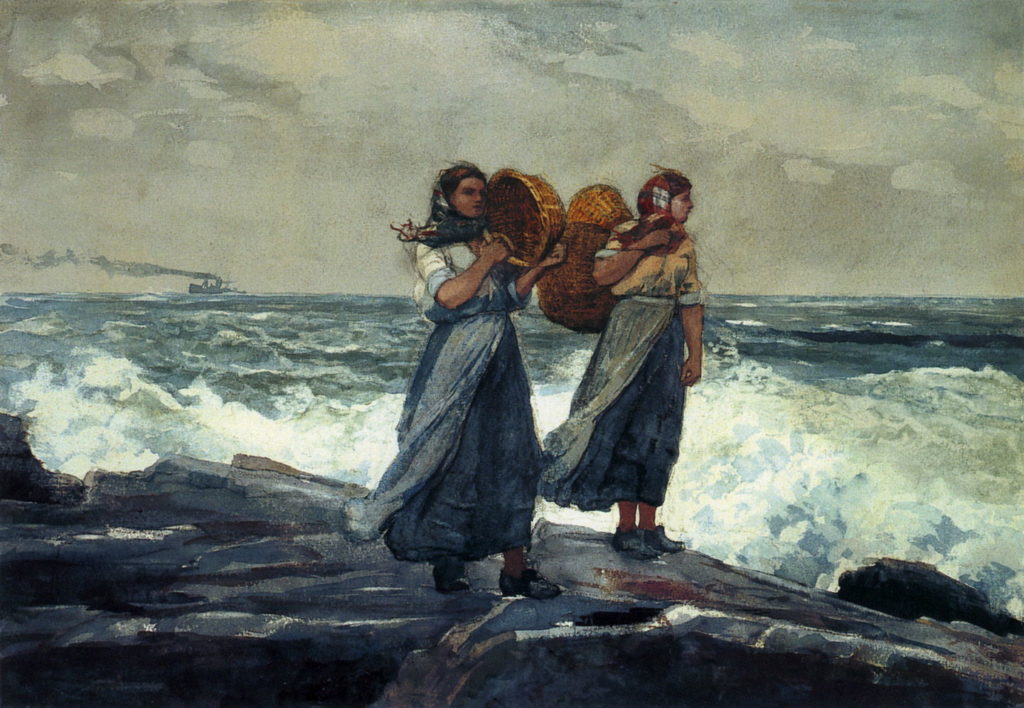 It was in his middle years that he began to show signs of increasingly antisocial behavior and shunned the company of other people. Then in 1881, he traveled to England where he spent two years sketching and painting in the remote fishing port of Cullercoats on the North Sea. This was the start of his period of greatest artistic growth. He chose to depict scenes of the women of the town who mended nets, kept house and waited for their men to return from the sea. He created a series of watercolors. Once he returned to America in 1883 the sea became the dominant theme in Homer’s artwork. He moved to the fishing village of Prouts Neck, Maine. In his studio, he loved the solitude of this bleak and desolate coast. In the summer of 1883 Homer saw a demonstration in Atlantic City, New Jersey of the use of a breeches buoy for sea rescues. That was when he painted his popular painting The Life Line in 1884. Other painting of sea rescue followed. His interest in the sea itself came after a trip to the Grand Banks of Newfoundland, Canada with a fishing fleet. One of his most impressive artworks at this time was Fog Warning. During his travels north to Canada and south to the Caribbean he painted may bright watercolors. In Huntsman and Dogs in 1891 Homer painted an autumnal landscape depicting a young hunter killing for sport instead of for food. Homer chose to abandon the human subject entirely when he painted The Fox Hunt in 1893. In this painting, he shows the fox foraging for food in the snow while starving black crows attack him.

In Northeaster there is the struggle of between the sea and the rocky coast. The Gulf Stream shows a black man lying inert on the deck of a small sailboat. It is a hurricane that shredded the sails, snapped off the mast and took away the rudder. Sharks encircle the boat and a boat on the distant horizon passes him by.

Homer had become crustier and more isolated in his old age but continued to paint even into the first decade of the 20th century. He died at this Prouts Neck studio in 1910. He had become known as a leading American painter in the 1890s and his artwork brought top price. The greatest recognition of this artistic achievement came in the years that followed his death.