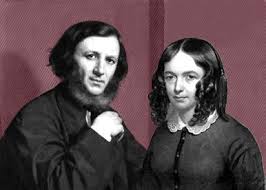 At this time Barrett was a well-known and respected poet who had also published literary criticism and Greek translations as well as poetry. Her first volume of poems “The Seraphim and Other Poems” came out in 1838. This was followed by “Poems by Elizabeth Barrett” in 1844.

She was born in Durham, England in 1806 in a family with wealth and position. Unfortunately, she was reclusive in her youth because she suffered from weak lungs and retreated, even more, when her beloved brother died in 1940. Her poetry was very well received and she had the chance to meet Wordsworth and other renowned poets of that time.

Robert Browning was the son of a bank clerk and was educated at the University of London. He continued his education at the home of his parents where he read extensively and wrote poetry. Unfortunately, his early poetic work was criticized until he discovered dramatic monologue and included that in his poetry writing “Dramatic Lyrics” in 1842. It was not received well but Elizabeth Barrett defended it and Browning thanked her for this in writing and wanted to meet her.

At first, Barrett was unsure about meeting Browning but once she did they both fell in love. Barrett’s father took a dislike to Browning regarding him as a fortune seeker. Therefore both poets kept their courtship a secret. Finally, while Barrett’s family was away she snuck out of the house and met Browning at St. Marylebone Parish Church where they got married. They kept the marriage a secret and Barrett returned to her home for a week finally fleeing with Browning to Italy. She never saw her father again.

The Brownings lived happily for fifteen years in Italy. During this time his wife’s weak health improved and the couple had a son in 1849. In 1850 Elizabeth published her best-known work “Sonnets From the Portuguese”. These sonnets chronicled the courtship and marriage of the couple. Her blank-verse novel “Aurora” became a bestseller in 1857.

During her lifetime Elizabeth Barrett Browning’s reputation as a poet overshadowed that of her husband. She died in her husband’s arms in 1861 and Browning returned to England with their son. There he became an avid socialite. He published “The Ring and the Book”, a 12-volume poem about a real 17th-century murder trial in Rome in 1868. Browning died in 1889.