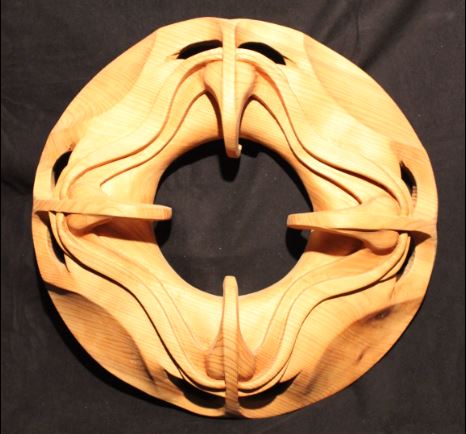 I have always watched a lot of science fiction and adventure movies, ever since I was a little kid. I was especially attracted to the Indiana Jones Movies. I always loved the ancient artifacts that held powers that lead you to the treasure or some higher enlightenment. This idea is what lead me to designing this piece! I know it sounds kinda dumb and unreallistic but that was the point. I thought that after creating this medallion, centuries down the road, after I’m long gone, some people would look at this and try and figure out its hidden secret or meaning. I’d love to be the reincarnated fly on the wall so I could hear some of the interpretations of what I considered to be just a cool design and fun piece of wall art.But who knows maybe a certain chant from somewhere might open up a space portal to another dimension with the help of my medallion.

Nah! That’s a little much!! Lol