Vincent Van Gogh was a post-Impressionist painter and his artwork is highly regarded. He died at the young age of 37 in 1890. There are two movies that feature the artwork of Van Gogh “Lust for Life” and “Midnight in Paris”. These movies were Academy Award winners. As far as it is known, supposedly this artist sold only one painting in his lifetime. His most celebrated artwork is“The Starry Night” and this painting became part of the permanent collection of the Museum of Modern Art in New York City in 1941. To be able to paint late into the night Van Gogh supposedly the artist painted with candles lining the brim of this straw hat. You might think that is not possible but it has been accepted as the truth. The artist even went out to cafes at night with the candles on the brim of his straw hat. You can imagine what the customers at the other tables thought. It is a known fact that artists can be quite eccentric. Van Gogh wrote in a letter to his artist friend Anthon van Rappard about a fable in which a woman is represented by a candle and a man by a moth.

Not Suicide but Murder

In 2011 Pulitzer Prize-winning biographers Steven Naifeh and Gregory White Smith published a book titled “Van Gogh: The Life”. In the book, it states that the artist did not commit suicide but was actually murdered by a local teen bully. Art historians are still unconvinced of this and the Van Gogh Museum in Amsterdam, The Netherlands still lists his death as a definitive suicide. However in an article published by the magazine “Vanity Fair” in November 2014 in which it said that a forensic scientist couldn’t seem to understand how the artist could hold the gun so close to his body and why there weren’t any burn marks on his hands.

In the book that was published, it is pointed out the no gun was ever found, the easel upon which Van Gogh was supposedly painting was also never found and it certainly seems unusual that the artist after being wounded could walk about a mile through a wheat field to the inn where he was staying. Other claims against suicide were that at this time Van Gogh’s paintings were rather lighthearted and that the artist himself had written against such a thing as suicide in letters. Then again at the inn Van Gogh supposedly said that he wanted to die and didn’t want medical help. He told his brother that the sadness that had overcome him would last forever.

Contrary to what people might have read the artist’s entire ear wasn’t cut off, just a part of his left ear lobe. Unusual as it might seem the “Le Petit Journal” stated that three days after this incident Van Gogh gave part of his earlobe to a prostitute. At this particular time, the artist was living with a friend and fellow artist Paul Gauguin. Gauguin was an expert fencer.

The two friends were known to fight violently and it could have happened that Gauguin sliced off part of Van Gogh’s ear but the two never admitted this. They did have an unusual friendship in that Van Gogh supposedly liked Gauguin more than the Dutch artist liked his friend. Van Gogh’s own brother, Theo is said to have bribed Gauguin at one time to continue living in the same house. It is odd that Van Gogh had no memory of that night but in a letter to Theo, he wrote that he was glad Gaugin wasn’t armed with weapons of war such as machine guns.

A Self-admitted Patient in an Asylum Van Gogh was discharged from a hospital in Arles, France in January 1889 following the earlobe incident. The artist felt that he had not sufficiently recovered his mental health and checked himself into the Saint-Paul Asylum. During his stay at the asylum, Van Gogh painted lots of the artworks which today are looked upon as classics including “Irises”, “The Olive Trees” and “The Starry Night’. The artist himself thought that “The Starry Night” was a failure. He sent a package of his paintings to his brother Theo but his brother had no success in selling them. Not having enough postage “The Starry Night” was not sent. While growing up in Zundert, The Netherlands Van Gogh would walk by a tombstone that had his name on it. The artist’s father Theo Van Gogh was the pastor of a Dutch Reformed Church in 1849. It was at that time that a baby boy was stillborn and named Vincent and was buried in the churchyard. Vincent was given the same name as his dead brother, therefore, was the reason why a tombstone had his name on it. Zundert still boasts with the fact that Van Gogh was born there. The town has Van Gogh Square and a commemorative statue of Van Gogh and his brother, Theo. There is also a Van Gogh house but the original house on the town’s main street at Markt 29 has been torn down.

Van Gogh didn’t pick up a paintbrush until he was 27 or 28. When he died at the age of 37 he had completed almost 900 artworks painting about two per week. Before deciding on becoming an artist he tried other jobs like a lay minister, a teacher, and an art dealer. He finally wrote to his brother and said that he thought painting was what he should be doing. At the time of his death, he also has over 1,000 works on paper. It appears that Van Gogh might have had a form of epilepsy and a behavioral condition, known as hypergraphia which makes those who are afflicted to have an intense need to write or as it was in Van Gogh’s case to paint. This condition so fascinated me, since I have been writing for ages that I have written about it too. 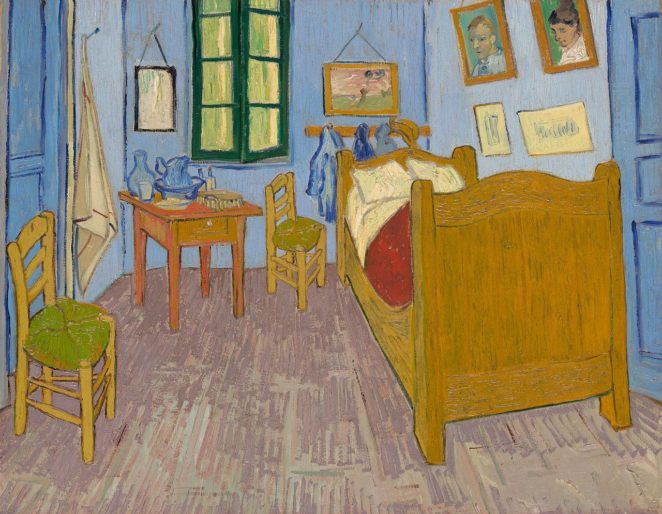 Van Gogh was known to use a signature yellow color in his paintings which was available due to the Industrial Revolution and a new pigment known as chrome yellow. What has happened over the years is that these types of yellow color used in his paintings like “Bedroom in Arles” have started to fade and brown. Therefore contemporary viewers of his works of art cannot see the original luminance in the work. Unfortunately, the change in color is permanent and if there was an attempt to reverse the chemical reaction the paintings could be damaged further.

By these very words, the oldest living person who met Van Gogh in her lifetime described him. Jeannie Calment was born in 1875 and died at the age of 122 in 1997. Most of her life she lived in Arles, France where Van Gogh stayed in 1888. Her uncle owned a shop and Van Gogh went there to buy paints. After she had met him at the age of 12 or 13 she also said about him that he was very ugly, ungracious, impolite and sick but she forgave him and that they called him “loco”.

In his lifetime Van Gogh painted more than 30 self-portraits.