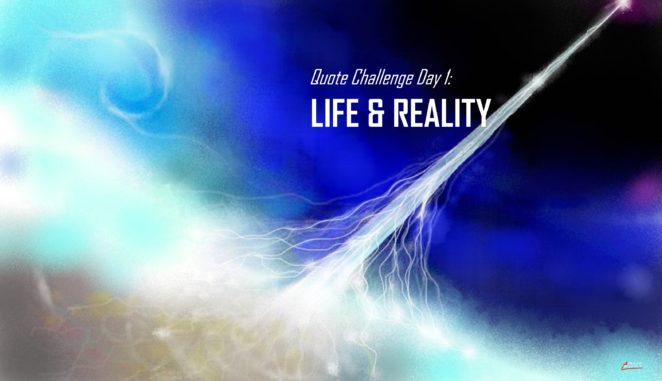 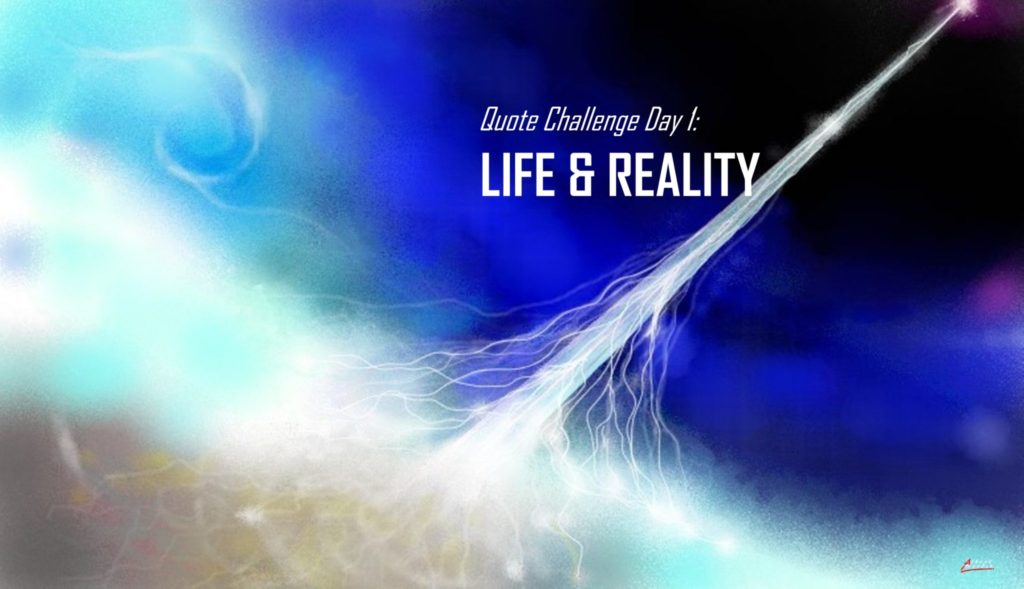 Della, she is an amazing new friend. I read some of her postings in Virily, and I admired her character and interest in philosophy. Her writing and poetry have a beautiful spirit and meaningful depth. On some of my posts in Virily, she was quite able to understand my point and respond well. Perhaps our common interests have facilitated our fast-paced heart.

It was unexpected and an honor for me when Della had nominated me to take part in the three-day Quote Challenge. To honor the challenge, which is also a challenge from Pixie friend Della’s friends, here are some of my favorite quotes. 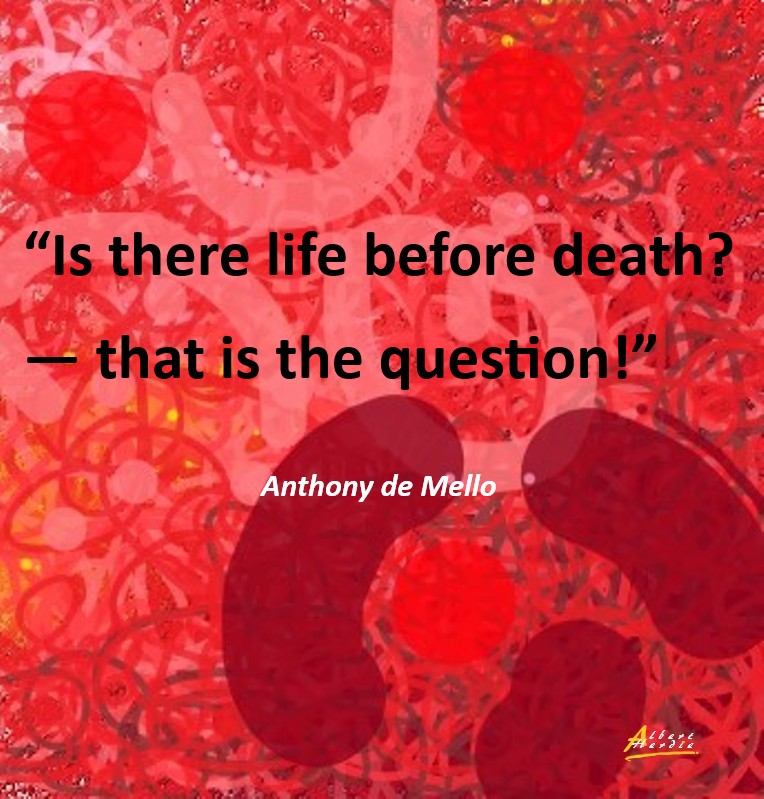 Since childhood, I was curious by many questions about life that are getting stronger from time to time. My wild youth, fights and drug involvement cannot silence the mouth of the source of all those questions. Studying the martial arts of Pencak Silat and supernatural or occult has made the question more and more inundated Uniquely, my steps as an artist and designer shift to training and consulting world. A world that has brought me together with many people and organizations. The long experience in the neighborhood has shown many phenomena. The haunting question finally clumped and shouted, “What is life and what is death?”. Religions that have been handed down and I believe in are not even able to help give answers, let alone just supernatural abilities.

In the midst of mounting anxiety, I met the spirituality of Anthony “Tony” de Mello through his books. He was a pastor, spiritual teacher, writer and public speaker, De Mello wrote several books on spirituality and hosted numerous spiritual retreats and conferences. He continues to be known for his unconventional approach to the priesthood and his storytelling which drew from the various mystical traditions of both East and West. Until his sudden death on June 2, 1987, Fr. Tony de Mello was the director of the Sadhana Institute of Pastoral Counseling near Poona, India.

Through his perspective, I see another way to find answers. 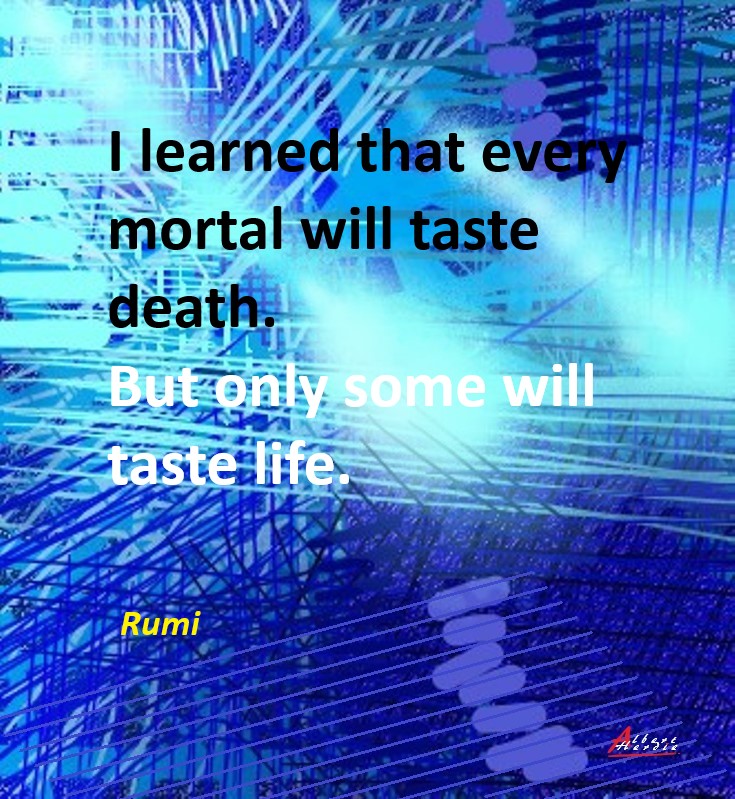 After seeing the road that De Mello had shown me, I hurried to take a step on the way. At the beginning of that step I have met Maulana Jalaluddin Rumi Muhammad bin Hasin al-Khattabi al-Bakri (Jalaluddin Rumi) or often called Rumi, a Sufi poet who was born in Balkh (now Afghanistan) on 6 Rabiul Awwal in 604 Hijriah, or September 30, 1207, AD.

The famous collection of Rumi’s poetry called al-Matsnawi al-Maknawi is said to be a revolution against the Kalam Science that lost its zeal and strength. Its contents also criticize the steps and direction of philosophy, which tends to exceed the limit, castrate feelings and cult the ratio. Admittedly, Rumi’s poetry has its own characteristics compared to other poets of the poet. Through his poems, Rumi conveyed that understanding of the world can only be obtained through love, not solely through physical labor. In his poem, Rumi also conveyed that God, as his sole purpose, no one equals. 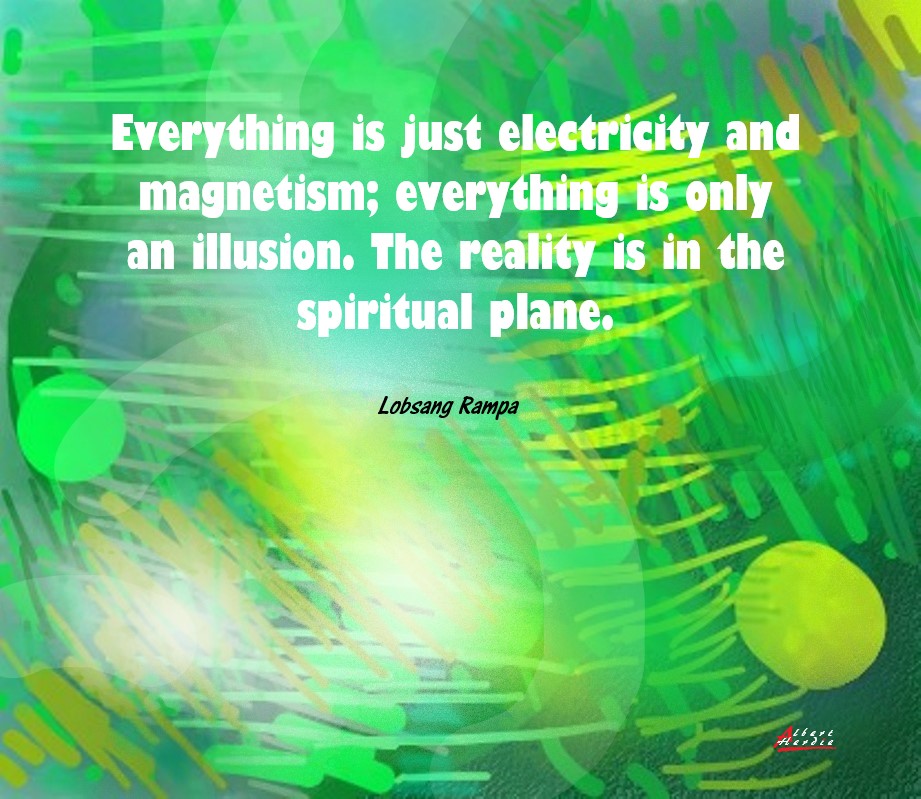 Lobsang Rampa is the pen name of an author who wrote books with paranormal and occult themes. His best-known work is The Third Eye, published in Britain in 1956.

Following the publication of the book, newspapers reported that Rampa was Cyril Henry Hoskin (April 8, 1910 – 25 January 1981), a plumber from Plympton in Devon who claimed that his body hosted the spirit of a Tibetan long going by the name of Tuesday Lobsang Rampa, who is purported to have authored the books. The name Tuesday relates to a claim in The Third Eye that Tibetans are named after the day of the week on which they were born.

The quote was very strange to me at first, hard to believe. Later, through various spiritual experiences, I acknowledge the truth. Today, that view is mostly found through the words of others or even through movies. Believe it or not, it’s up to you.

So, those are my first three quotes for Day 1. The next three of the Day 2 will come soon.

In the meantime, allow me to nominate three other bloggers to pick up the challenge. It’s kind of hard to choose who gets nominated, but by some names, I finally decided to give this challenge to the following three friends:

First up is Carol DM. She calls herself an amateur photographer. In Virily she posted a lot of nature, birds, butterflies, and sunsets mostly taken from his deck beside some very interesting quiz. Personally, she expresses her feelings honestly and openly. She is a sincere and insightful thinker and reflection, besides being full of love and caring for life.

“Those we love and lose are not where they are used to be. They are now wherever we are.” Written in her Bio.

Second up is Zaklina Maca Miljkovic. Women who are experts in handicrafts. Loves animals and cherish life in all its forms. I am amazed at her love and consistency in DIY, especially on used goods. Her works are unique and interesting. In my vision, she is a humble and self-reliant person who is tough in the face of life.

And third would be Cassy Janine. Fond of hiking. A nature lover and loves photography. She also writes poems and opinions or motivational articles. She has a wise and proactive thinking in learning in life. Cassy is a person who is quite open and has a strong confidence.

Hopefully, all of us will soon see your favorite quotes.