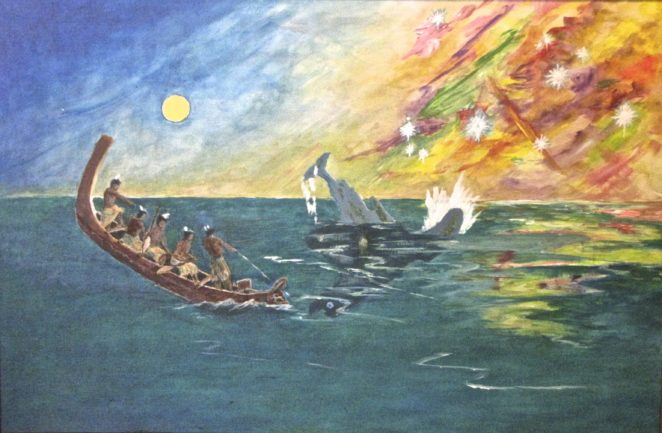 This is a late Matariki painting of Warwicks or Ricks..Its done in acrylic and “Matariki” is the Maori new year…It is the time of what is called the “Pleides” constellation is set in the New Zealand sky

The North pole of the earth is different from the South Pole. When you have Christmas in snow and ice eating Roast meat and Christmas puddings, we have a hot summer. In our winters you have hot summers. Our Christmas dinners sometimes become Bar -B – Ques, dinner outdoors, although we don’t have one of those.

I don’t know what constellations are showing but Matariki is the beginning of our official winter in June, so I am really late in this post.

However, this post is of the legendary Kupe, fishing up New Zealand with his fishing hook and you will see our New Zealand North Island coming out of the water.

There is some truth to this legend but not as we would think, if you go to the Waitakere Ranges in Auckland under the soil there are traces of shells from a sea bed a long time ago.

I think there is some truths in legends, maybe legends is truth with elaborate embroidery? Who knows?