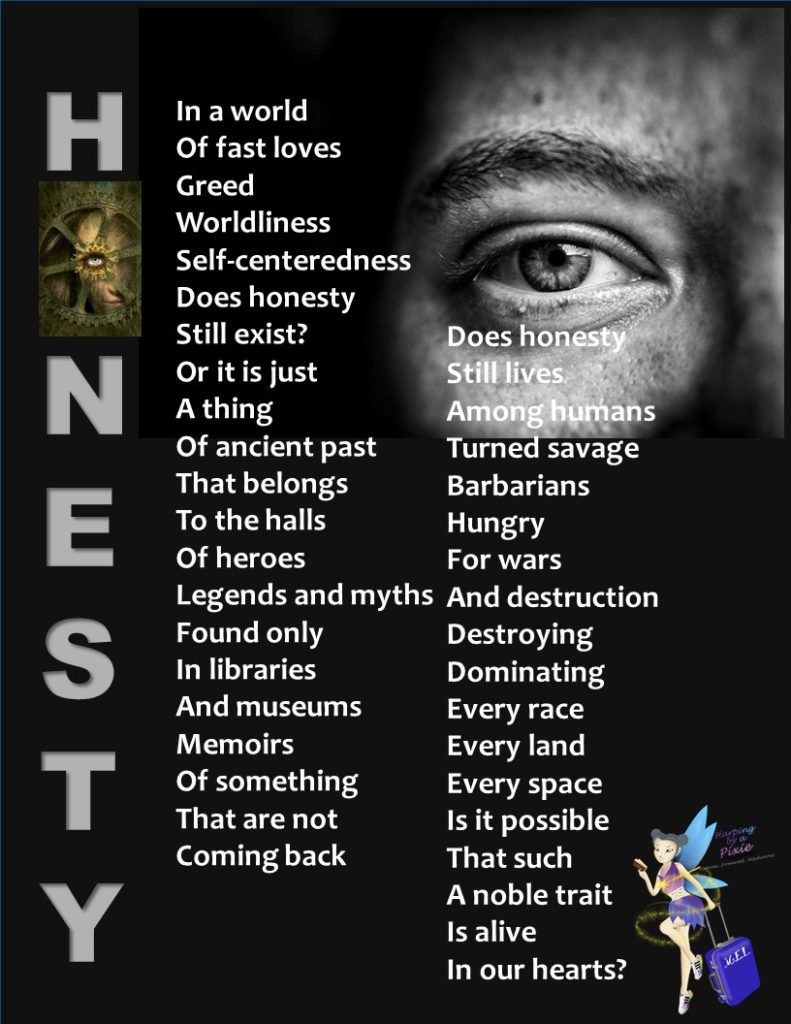 HONESTY is synonymous to INTEGRITY which, according to Mr. Google, is adherence to moral and ethical principles or soundness of moral character.

In a world of scarcity and competition where people are so focused with the most important character in their lives – the I, me and myself persona – does this noble quality still survive? In a world where we need to fit in,  — where trying to be true to our core means divergence and stupidity; while conformity is a standard being uphold by society as normal — people, oftentimes, sacrificed integrity in order to get ahead in life. Survival of the fittest. Do anything and everything to stay in the race regardless whether we are losing ourselves in the process. Sad maybe, but that is a fact. I do not need to cite to you examples; just read or watch the news and you will find there a wealth of stories where ordinary persons as well as leaders sacrificed integrity and humanity for greed.

It is, therefore, a breath of fresh air when personally we experienced kindness and honesty from strangers. Humans who will not gain anything from us — humans who chose to do well when they have a choice to do otherwise — humans who decided that being a Good Samaritan has still a place in this realm even without media mileage.

Many times I was the receiver of this privilege…back in 2015, while in Bali, I left my bag containing all my money, mobile phone, camera, tablet and PASSPORT in a tattoo shop. I was carrying two heavy ones and placed my handbag for a while to give my shoulders some rest. I forgot to pick it up again when we left because both of my hands were full. I was travelling with the girls so, technically, I will not go hungry by my careless and stupid action. But, to lose a PASSPORT in a foreign land will spell huge misfortune.

Guess what? Few minutes later, while we were in a travel agency and still without me realizing it, the shop owner named Eddie (and for the rest of my life maybe I will not forget that name and will associate it with good thing) came carrying my bag. I would kiss the guy if I could; but, all I said was THANK YOU with a GRATEFUL smile and a promise that if I ever get a tattoo I will get it from his shop.

Anyway, I was reminded of this incident because recently, I had the misfortune of forgetting attentiveness and relying when I should not. We were in a two-week vacay in South Korea. I left a package in the hotel lobby containing the shoes I bought for my brother and niece as well as a pair of mine that I used for 3 occasions only — and snacks I bought for if we get hungry while waiting the flight.

I will not put any blame on anyone except myself. I should have triple-checked despite assurance that all luggage were already loaded (I went for a last-minute bathroom trip because you know it was a long way to the international airport). I only realized it was not there upon unloading of our stuff in the airport. Going back was no longer an option because that would mean missing our flight.

I did the next best thing — I sent messages thru email and FB messenger.

Luckily, I received a response from Mr. Min Sung Kim, general manager of DH Naissance Hotel, saying that his staff has found my package and currently in safekeeping. I am trying to work out that the same be sent to us via EMS (shipping cost, understandably, will be paid by us because it is not part of hotel service you know, lol) but his word of confirmation was a big relief.

Truthfully, the cost of the new shoes is not enough reason to make me lose sleep (although my Adidas shoes has sentimental value because it was a gift from my sister). However, bargain-hunters will understand my feeling. I spent many days with aching feet, scouring many stores, looking for best deals only to leave it, inadvertently, in public area. Lol! Stupid mistake. Now, should I bite my elbow for that?

Nonetheless, let me say, that honesty still lives in the heart of many people regardless of color and creed. After all, kindness, according to Socrates, is innate to mankind. Therefore if kindness is inherent in us then so is honesty.

And hey, if ever you visit Seoul, South Korea do stay in DH Naissance Hotel – it is conveniently located, staff are helpful, the beds are awesome (it has moving bed frame which you can adjust) and the bathroom could rival any five-star hotel (think of whirlpool bathtub, fancy shower, toilet with built-in bidet and supplies that include cologne, gel, hair spray, facial stuff). If you care to see the photographs click this link. Plus, you get free pizza and vitamin-c drink as welcome compliment by Mr. Min Sung Kim. Seriously. And this is no paid ad, by the way (I don’t do paid advertisement in my blog, people, just in case you are wondering — all my travels and incidental expenses are personally paid — I guess, I want to make it clear in the light of some controversy over ex-deal proposal by a blogger).

In closing, I will mention that this is an entry to Nitin Nair Writes writing activity called TRAIN OF THOUGHTS in which the week’s theme is about HONESTY. Should you like to join, please read the guidelines here. I might introduce this challenge here when I finally have free time because my friend, Nitin, is not quite ready to join Virily; but, of course, it will be dubbed with a different name.