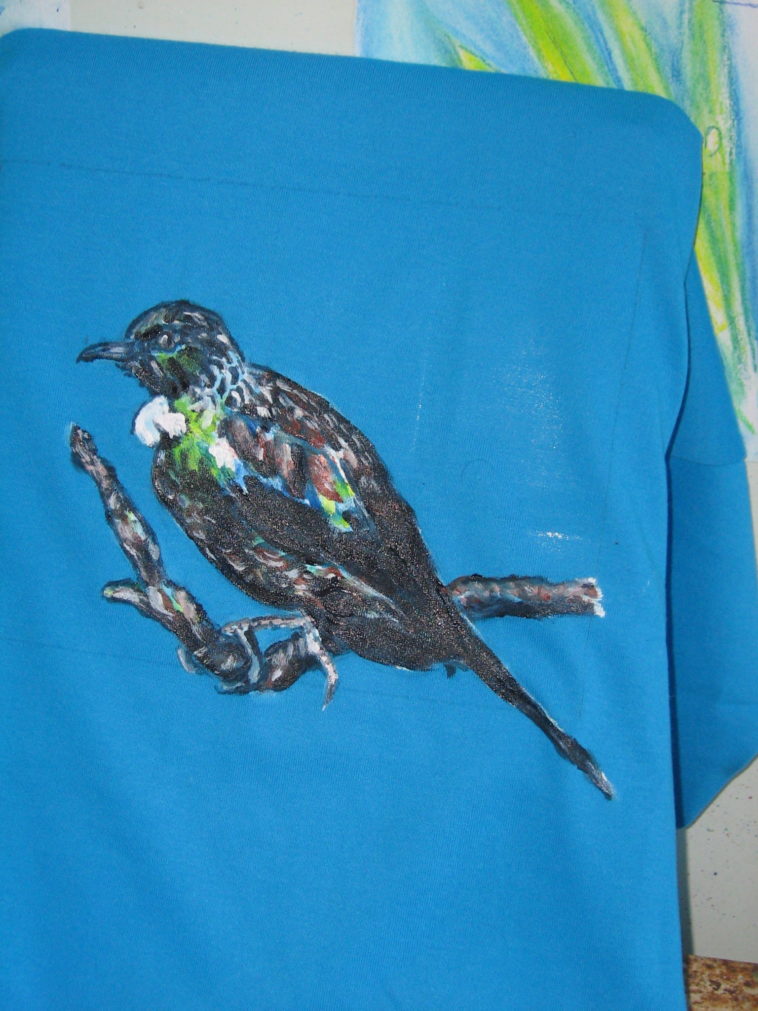 This is of a dragon, which is a myth. This is not evil, it gives people rides and eats garden weeds. That means it spends most of it’s time eating garden weeds and trims the trees as well. It’s vegetarian. I painted it from Anne McCaffrey’s fictional dragons of Pern.

I used acrylic paint and art fixitive. Painted it as a canvas, with some cardboard underneath the fabric. When it’s dry, I put a clean T-towel over it and iron it. It’s fully washable.

Desmond is wearing my hand painted T Shirt using one tone of a leopard. He was one of my good supporters.

This is Gene Dahm, wearing my hand painted T Shirt with a lion on it, Leo the Lion.

This is Virginia, an American tourist, and she’s wearing my hand painted T Shirt.

This is Virgina’s mother, the original American tourist wearing a T Shirt I hand painted as well. There is a story about them here.

I got a call from the care agency telling me about Virgina’s mother. On her very first day of a tour of New Zealand she fell down the concrete steps of Auckland’s War Memorial Museum and broke her leg and arm and damaged her teeth. A horrific introduction to New Zealand and she missed the tour. She was alone in a hotel in Auckland’s city centre. I was sent to help her.

I found her daughter, Virgina who had flown out to help her mother. But I managed to take them somewhere they wanted to go and told them that because of these circumstances I would take them out to a drive for free.  Made me mad to see such things happen to tourists on their first visit.

The only time I had was to take them for a drive on Auckland’s central waterfront. A beautiful drive that many of us do to enjoy the scenery. Very pretty place to go for a drive.

Anyway, there is part of the drive. Worth seeing if you visit Auckland, New Zealand.

The Cicadas were singing very loudly that day.

“You have rattlesnakes!” said Virgina

“We know, these are rattlesnakes!”

Then I showed them where the sound came, a cicada When we stopped at Achiles Point, St Heliers. We don’t have snakes in New Zealand except 2 legged ones, some people.

Anyway, they got a New Zealand made souvenir from me, a T Shirt each I was willing to give for free, but they paid for it, which was nice. I made them and posted them to them.  I did it because I was sick of people buying souvenirs from places that were made in the Oriental and sold by Orientals. I don’t mind the race but I have principles. A NZ souvenir should be made by a NZ  and I don’t mind if they are NZ Oriental as long as they are born here.

One New Zealand Tui painted on a T Shirt that was sold to some one in England. I made 10 for some one with a lot of family and then made matching cards in one night. Don’t know how I did it, but managed. Amazing what you can do when you have to.

A hand painted Kereru or New Zealand Wood pigeon I painted on this T Shirt. Probably gone to England.

This is a hand painted Fantail on a T Shirt also gone to England.

You know, it may not be much but there is something that is special about hand made objects. It’s personal and reflects a passion for what you do, which has special meaning if it’s relevant, made in New Zealand by a person who is a New Zealander and cares about what they do.

Machines and computers, printers are efficient. Yes I can print any art work on the internet. I guess it’s quicker but hand done is much more personal. Not perfect but it has more meaning because of the work that went into it. Something you care about doing hand done with more work seems to make a more meaningful connection.