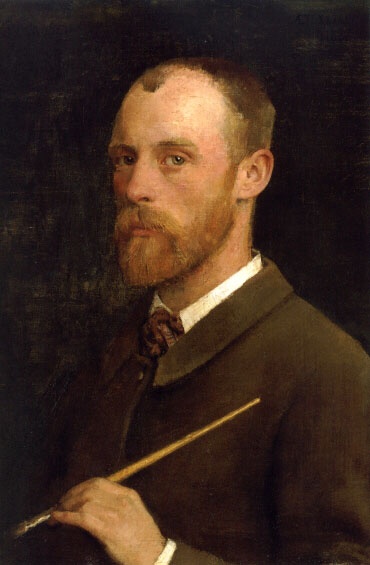 The name George Clausen is little known today, although during his lifetime he was considered to be one of the finest painters of his generation, and he received a knighthood in recognition of his contribution to the Arts. As Charles Johnson wrote in 1934:

“… of Clausen’s work more than of any other living painter’s it is safe to prophesy a continued fame rising above all changing fashions. The art of other men may live; that of Clausen will live.”

However, it is doubtful if one in a thousand culturally-minded people in Britain today would even recognise his name. Charles Johnson was wrong – fashions have changed and left George Clausen behind. However, there is one of his works that stands out from the rest and for which he does indeed deserve to be remembered.

George Clausen was born in 1852 in London, the son of a Danish father and a Scottish mother. His artistic training included two years at the National Art Training School, and he also studied for a time in Holland. He came under the influence of several artists, most notably the French painter Jules Bastien-Lepage, who painted outdoors in a naturalistic style. Another strong influence was Jean-Francois Millet, who was noted for his depictions of sunlight on figures in rural settings.

After moving to Hertfordshire in 1881 he began to paint rural scenes in a style that could be described as English Impressionist, being especially skilled at depicting figures in a landscape and capturing the effect of direct sunlight on a scene. However, to a modern eye much of his work seems to be overly romantic and unreal. We would think that it belonged more to the chocolate box than the art gallery. 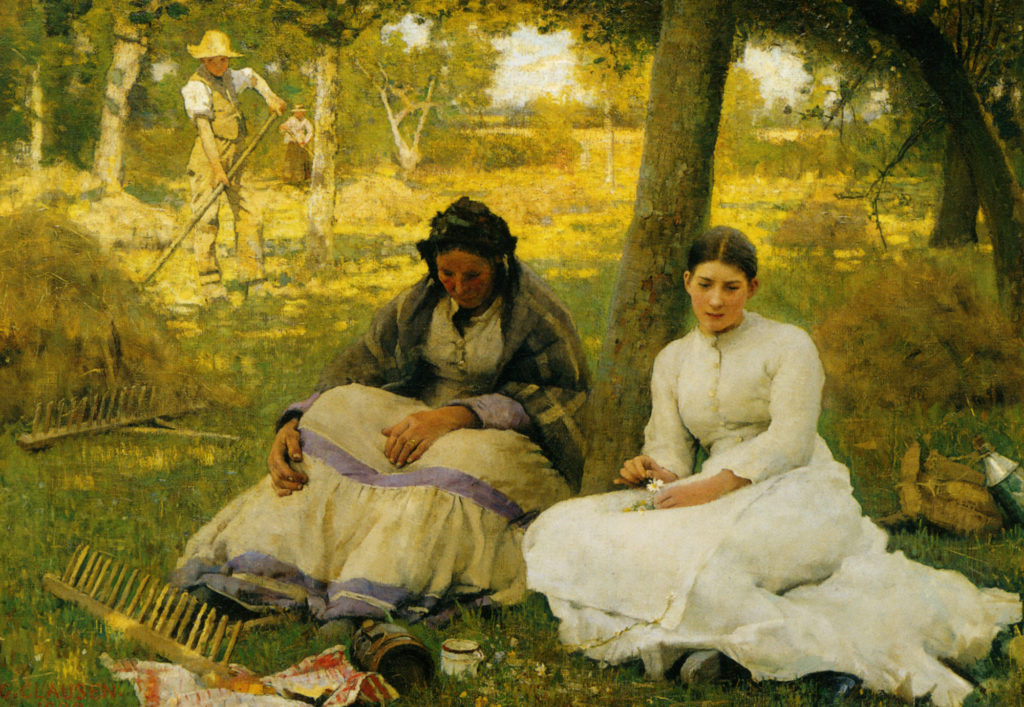 The quality of Clausen’s work was appreciated in the highest circles, such that he was elected as an associate of the Royal Academy in 1895 and in 1904 was appointed Professor of Painting at the Royal Academy Schools.

Being based in London again, he turned to studio work, producing a number of nudes and interior scenes in the years around 1910.

However, the world changed in 1914 with the outbreak of World War I. Clausen was appointed as an official war artist, although his age (he was 62 at the outbreak of war) meant that he was not required to visit the war zone but concentrated on portraying the home front, notably the production of weapons of war. “In The Gun Factory at Woolwich Arsenal” shows men working on artillery pieces, although the most striking feature of the painting is the shafts of sunlight entering from a high window. This seems to interest him far more than the subject of the painting itself. 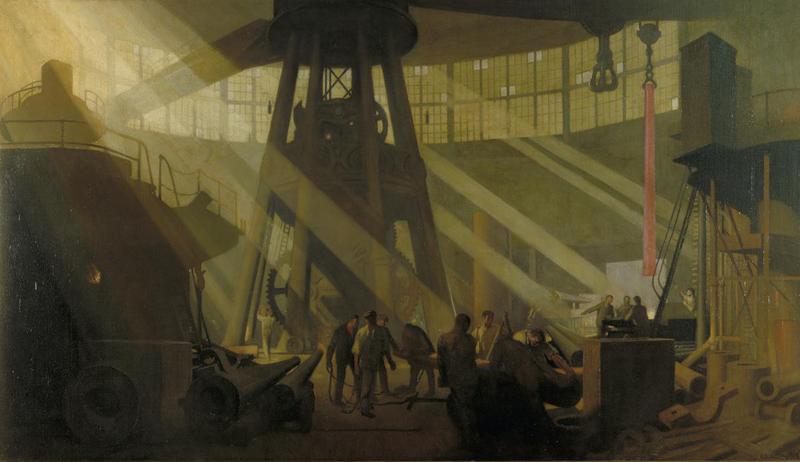 After the war he was eventually able to return to the countryside, firstly in Essex and later in Berkshire, with his subject matter also returning to that of his original interests.

However, it was a painting dating from the war years that is his most remarkable. It is part of the art collection at the Imperial War Museum (Lambeth, London) and it was painted in 1916 while the war was at its height.

Clausen’s daughter Katherine lost her fiancé in the war, and this clearly affected the whole family very deeply.

In the painting, we see a naked young woman in the foreground, kneeling in an almost foetal position, with head in hands, before a simple wooden cross. The white skin of her body contrasts starkly with the plain brown of the mud on which she kneels, and with the background of flooded shell craters stretching to a distant horizon surmounted by a featureless sky. 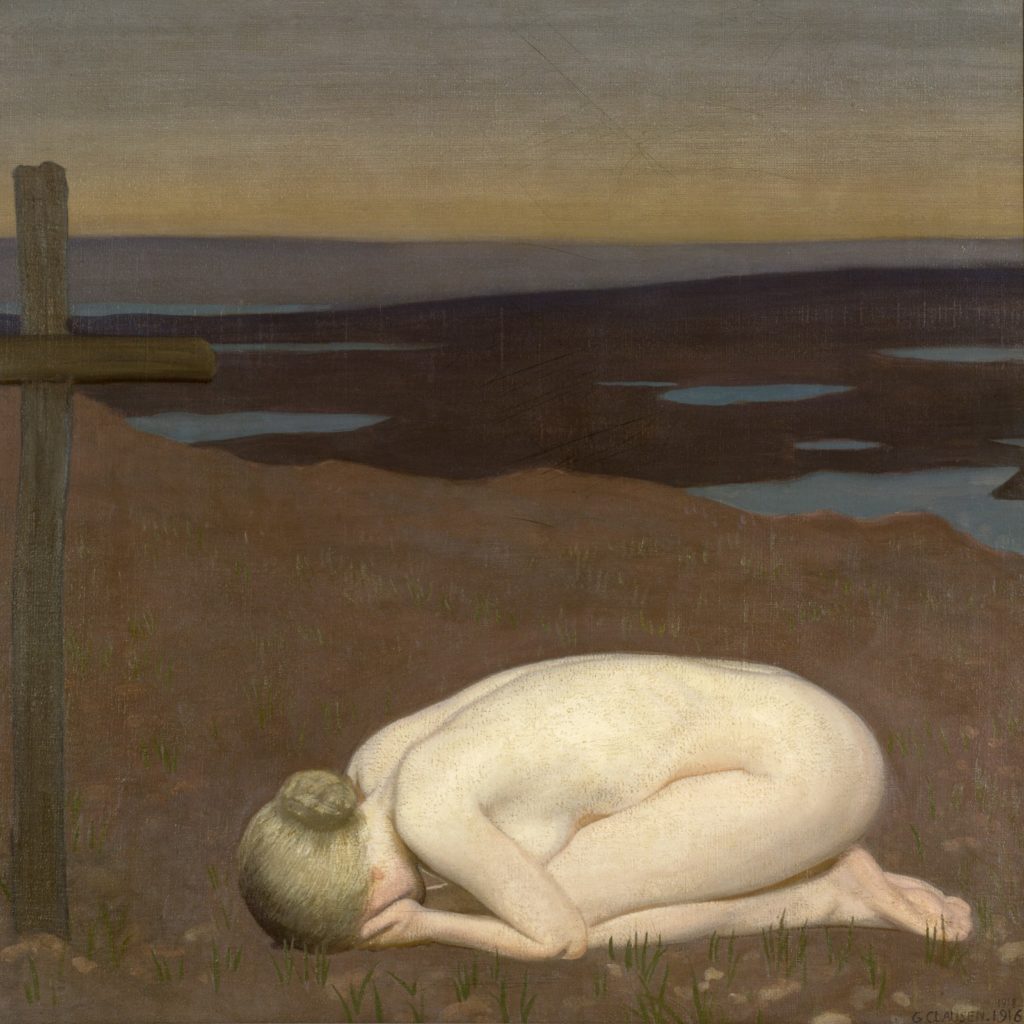 Nothing lives in this landscape except for a few meagre blades of grass near the woman. There are no shellbursts, and nothing to indicate movement of any kind. This is a dead, deserted landscape.

The contrast with the rest of Clausen’s output is startling. There is nothing of the chocolate box here, no peasants gathering the harvest as the sun beats down, no realistic naturalism. Instead there is a scene that is almost Daliesque in its starkness and allegorical nature.

This is an impossible scene, in that no naked woman ever knelt to mourn before a single cross on a deserted Flanders battlefield. However, it is also intensely realistic in the message it portrays.

The woman represents a lost generation not only of male youth but of female youth as well. Indeed, her virginal white skin, unsullied even by the mud of her surroundings, and perfect body (even to the hair tied in a bun) can be seen as symbolic of all the would-be wedding-night brides who will never conceive the members of the generation to come.

The lasting impression one takes from this painting is one of loss. The congress this woman should be having with the man who lies buried beneath her is of a very different kind to the grief that she is experiencing here. Her face is hidden, so her grief is private, but her statement is public.

Clausen’s message is so powerful because it is about the loss of the future. Death is the denial of life, and when it happens to youth it is the denial of future life. Had Clausen never painted anything else during his long and productive life, this one painting should have been enough to give him a lasting name. Unfortunately, most of his output is now outdated, and “Youth Mourning” was too far ahead of its time.