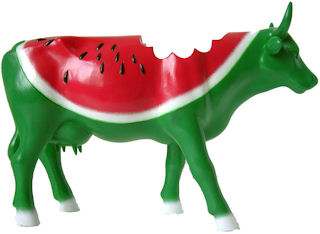 Artists are truly interesting and it can be fun to learn how things got started and what motivates movements. in their glory days CowParade was the largest and most successful public art event in the world. They          featured full size painted cows. There were all sorts of different themes and the cows all of the sudden invaded the city.

When the events end the cows are auctioned off for a charity event. CowParades have ranged in size from 32 cows in Auckland, New Zealand to 450 cows in New York City. The average event has 75 to 150 cows. It is an amazing site. We went to five of them and totally loved every single event. It’s not that we “love” cows, but we love the idea of exposing a city to something fun and different and letting artists do their thing.

Each city that hosts the event gets to choose what charity they are going to sponsor. Like most eclectic ideas interest fades after a time, but many still collect the figurines and find the whole experience at the very least, interesting.