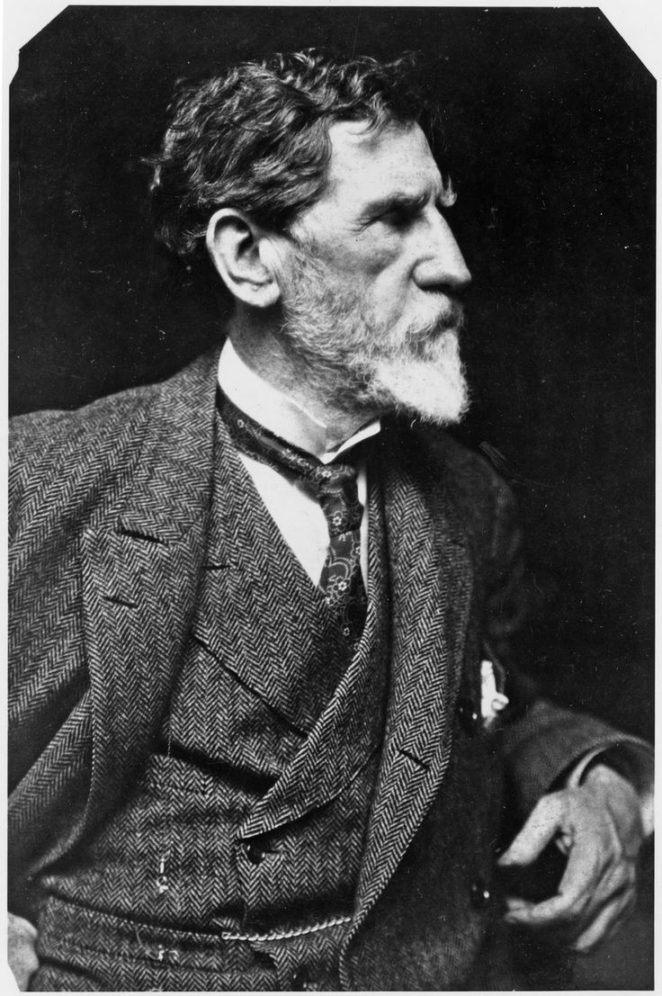 This Irish-American sculptor Augustus Saint-Gaudens was born on March 1, 1848 in Dublin, Ireland. His father was of French descent and his mother was Irish. He was just an infant when his parent immigrated to the United States and he was raised in New York. Saint-Gaudens became an apprentice to a cameo-cutter learning to carve images into jewelry. At this time he also took art classes at the Cooper Union (a privately funded college in the East Village in New York City at Cooper Square and Astor Place) and the National Academy of Design (an honorary association of American artists).

As do most artists he traveled to Paris, France at the age of 19 and studied in the studio of Francois Jouffroy at the Ecole des Beaux-Arts or School of Fine Arts. Later on in 1870 Saint-Gaudens went to Rome, Italy where he studied art and architecture and was able to work on his first commissions. In Rome, he met the women whom he would marry Augusta Fisher Homer who was a deaf American art student. They returned to New York and were married in 1877. Saint-Gaudens was now a member of the Tilers which was a group of prominent artists and writers. Among them was Winslow Homer (an American landscape painter and printmaker and his wife’s fourth cousin), William Merritt Chase (an American Impressionism painter) and Arthur Quartley (an American painter best known for his marine seascapes). The sculptor’s first major commission came in 1876 when he was engaged to sculpt a monument to Civil War Admiral David Farragut in Madison Square in New York. The architectural setting for the monument was designed by Saint-Gaudens friend Stanford White. The unveiling was in 1881 and this monument was so well-received that it established Saint-Gaudens reputation. One commission followed another. One impressive commission was the Standing Lincoln statue in Lincoln Park in Chicago. This statue’s setting was also done by White and it is looked upon as the finest portrait statue in the United States. There is a copy of the Standing Lincoln statue at Lincoln’s Tomb in Springfield, Illinois, and another copy can be found in front of Westminster Abbey facing Parliament Square in London, England.

Saint-Gaudens’ artworks include many funerary monuments and busts some of them are the Adams Memorial (in Rock Creek Cemetery in Washington D.C.)l, the Peter Cooper Monument (at Cooper Union in New York) and the John A. Logan Monument (in Grant Park in Chicago). One of Saint-Gaudens’ most impressive funerary monuments is the bronze bas-relief forming the Robert Gould Shaw Memorial on Boston Common. It took the sculptor fourteen years of work to complete this memorial. Worth mentioning are also two equestrian monuments in honor of two Civil War generals. General John A. Logan (mentioned above) and General William Tecumseh Sherman which stands at the corner of Central Park in New York City. Saint-Gaudens made another statue of Abraham Lincoln in 1909 in honor of the Lincoln Centennial. This statue was of a seated Lincoln – Abraham Lincoln: The Head of State and is located in Grant Park in Chicago. On the 100th anniversary of Lincoln’s birth, a commemorative postage stamp was issued with a picture of this statue’s head on it. 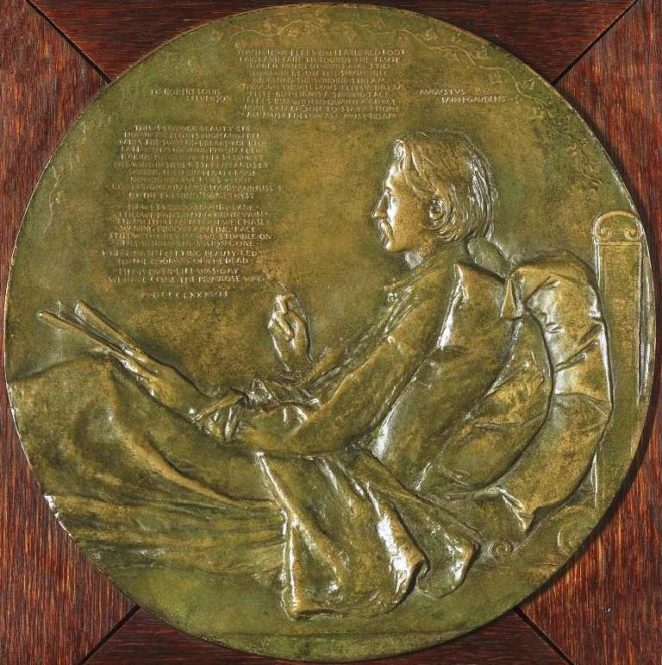 Among other types of work Saint-Gaudens also made medallions. One medallion was of Robert Louis Stevenson showing the writer who was in ill health propped up in his bed writing. It was reproduced for the Stevenson memorial in St. Giles’ Cathedral in Edinburgh, Scotland.

The sculptor also designed a double eagle coin for the U.S. Mint and was chosen by Theodore Roosevelt at the beginning of the 20th century to redesign the coinage of the nation. Saint-Gaudens made an ultra high-relief $20 gold piece.

Saint-Gaudens also taught art students and tutored them in private at the Art Students League of New York taking on a number of assistants. The sculptor became an artistic advisor for the World’s Columbian Exposition of 1893. He supported the American Academy in Rome and part of the McMillan Commission. During his lifetime Saint-Gaudens worked with and trained a great many of the next generations finest sculptors.

Saint-Gaudens was diagnosed with cancer in 1900 and he then decided to live in Cornish, New Hampshire at his Federal house which had a barn-studio and lovely gardens. He and his family had been spending their summers here starting from 1885. Here he was part of the Cornish Art Colony. The area itself attracted about a hundred artists, sculptors, writers, designers and politicians who lived in Cornish either full time or during the summers. Saint-Gaudens was posthumously elected to the Hall of Fame for Great Americans in 1920 and he was honored in 1940 by the U.S. Post Office which chose him to appear on a postage stamp when they issued their postage stamp series The Famous American Series honoring America’s famous artists, poets, educators, authors, scientists, composers, and inventors.