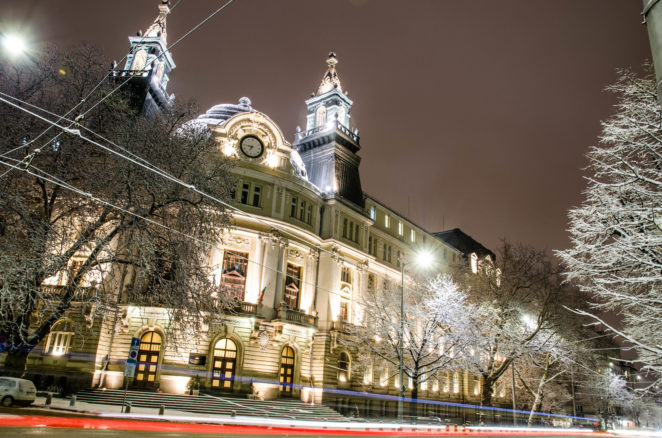 I continued my walk on the snowy streets of Sofia.

Street traffic has faded, and I’ve been able to take a few pictures of one of the city’s finest buildings.

This is the building of the Ministry of Agriculture.

In 1912, the Sofia Regional Court (analogue to the current district administration) announced a competition for the construction of its own building. At that time (as it is today) most institutions in the young Bulgarian state strive to move into new and beautiful buildings.

An international jury of distinguished French, Italian, Austrian and Bulgarian architects was chosen. It must assess the received projects for the building of the Regional Court.Unanimously, the specialists give first and second prizes to our famous architect Nikola Lazarov on the ideas presented by him. However, the implementation of the project slowed down due to the outbreak of the First World War. That’s why the construction started eight years later – in 1920.

The work of hundreds of masters from all over Bulgaria was used to lift the building. It lasts for 7 years due to the complex and massive construction for its time. The building was finally finished in 1927 and accommodated the officials of the District Court. The Audit Office staff also housed for a while.

After the change of power on 9 September 1944, the farm was housed in the building.