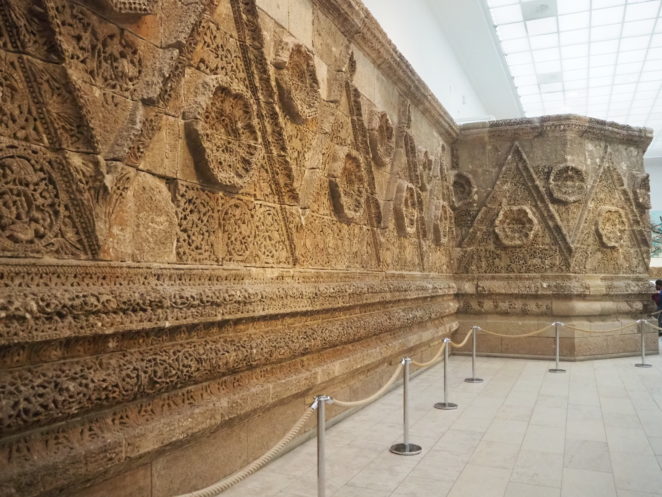 The ruins of Mshatta Palace lie some 30 kms south of Amman, the capital of Jordan. The palace was built during the rule of Caliph al-Walid II during the middle of the 8th century, which was towards the end of the dominance of the Umayyad dynasty in this region. Mshatta was one of a chain of palaces that stretched from southern Jordan through Palestine and into northeast Syria.

Mshatta Palace covered an area 144 metres square, comprising a mosque, living quarters and central courtyard. There is evidence that the palace was never completed.

The outer stone walls of the complex were richly carved with decorative reliefs, with a substantial portion of the surviving façade having been removed from the site and taken to Berlin in 1903, where it is now on display in the Museum of Islamic Art that forms part of the Pergamon Museum on Museum Island.

A zigzag relief band divides the façade into triangles within which there is a wealth of artistic variation. The main themes are vines and tendrils, within which can be seen various animals, birds and mythical creatures.

There are depictions of birds plucking at grapes, and cattle and lions standing together peacefully, which is an image borrowed from early Byzantine Christian art. Griffins and centaurs can also be seen.

However, the imagery is markedly different on a portion of the wall to one side of what is on display. Here, the decoration comprises plant life only, with no animals to be seen. This is the façade that fronted the mosque part of the Palace, and it therefore obeys the Islamic prohibition on the portrayal of living creatures.

This is a remarkable survival from more than a thousand years ago, although one has to question the morality of taking treasures like this from their country of origin to a museum in central Europe. On the other hand, would the designs have been so well preserved if they had stayed in their original location? This is always difficult conundrum to solve.