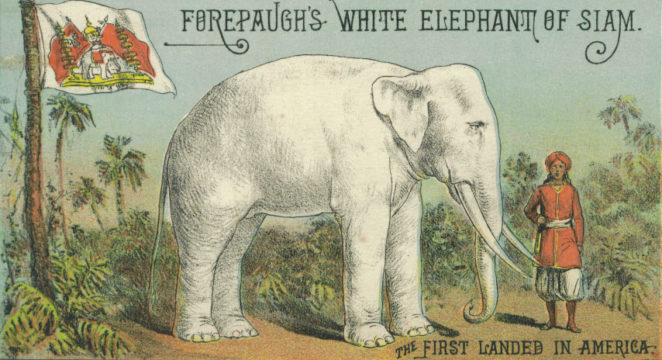 We often use the term “white elephant” to describe a publicly funded project that costs a huge amount of money to build and maintain but is generally reckoned to be utterly useless. This is a case of a term being used for something very close to its original meaning, although it rarely applies to real elephants these days.

In old Siam (now known as Thailand) elephants were extremely useful animals when tamed and trained to do all sorts of agricultural work – just about everything that horses would do on western farms, or tractors in more recent times. They were also used to carry heavy goods and on ceremonial occasions.

As we know, elephants are usually grey, but sometimes a white one is born. This is a very rare event, so every time this happened in 18th century Siam it automatically became the property of the King and therefore highly revered for that reason alone.

The white elephant’s special status meant that it could not be put to work or even ridden, but it had to be looked after and pampered. For someone to have charge of a white elephant but neglect it in any way was a serious offence.

That meant that the King had an excellent means of keeping people in order. If somebody annoyed him, but could not actually be accused of doing something for which he could be punished, the King would give him a present – namely a white elephant.

To be given anything by the King was clearly a great honour, and the recipient had no choice but to treat the gift with every consideration, but nobody who was given that particular gift was likely to be very happy about it. Here was a hulking great beast that was very expensive to maintain, was likely to have a lifespan that equaled or exceeded that of its new owner, but which could never be made to pay its way. Many people who were given white elephants suffered financial ruin as a result.

It is hardly surprising that British travelers to Siam saw the custom of royal gifts that bankrupted the recipients as being an excellent metaphor for the useless and costly buildings and monuments that their own government sought to foist upon the general public. The use of the term “white elephant” is still widespread, even though most people have no idea where it comes from.