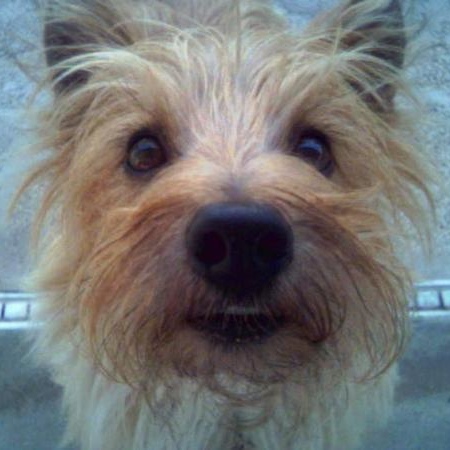 Sam is a 14 year old Cairn Terrier. He was Richards dog before I met Richard. Sam was our only fur baby before we started adopting all the rest. (We now have 6 in total)   Sam is a good boy but reminds me of a grumpy old man. Lol

He loves cats and is our only dog that lets HarleyQuinn love on him. The other 2 dogs are afraid of the cats. When I first met Richard 8 years ago Sam and I bonded quickly and we would lay on the couch together and take naps. Sam may be 14 and a grumpy boy but he still plays like he is a puppy. He loves to play tug-o-war and loves dog toys a lot!! Unfortunately after our move from Florida to Missouri Sam started to feel resentment towards Dexter or maybe he is just asserting his Alpha Male. He will follow Dexter around growling at him constantly!!

At times Dexter will get so frustrated with Sam that he will jump on Sam. Dexter doesn’t hurt Sam he just jumps on him to say STOP!! But it’s still bad!! And the weird thing is that the boys don’t act that way when Richard is home. Only with me. I’m trying to be the pack leader, per Cesar Millan, but apparently I’m doing something wrong. All in all tho Sam is a good boy. He just has some territorial issues with Dexter.