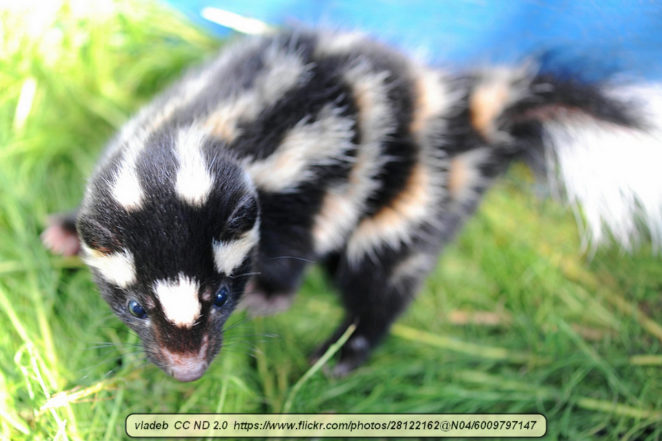 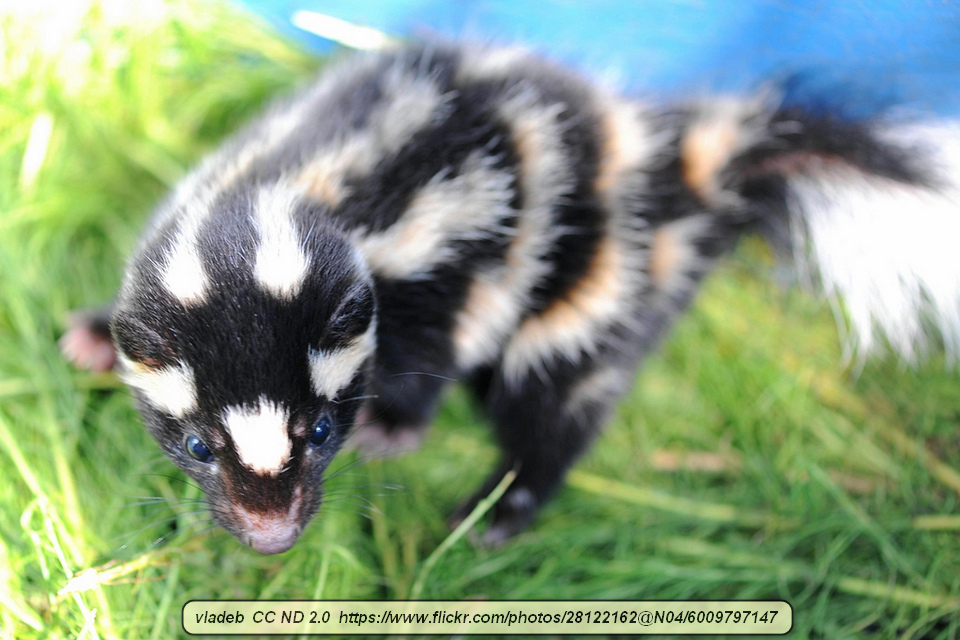 The spotted skunk isn’t seen often but it is a very attractive type of skunk.They are actually cute and adorable.

Spotted skunks are smaller than striped skunks, which most Americans are acquainted with, yet they have longer legs. They move much like a cat does and could be mistaken for a little house cat. The color is mostly black, with white spots here and there. The pattern differs from animal to animal and this aids in the identification of an individual. They also have a diamond-shaped white patch of fur on the forehead.

The snout of a spotted skunk is shorter than that of the striped skunk and the face looks more like that of the cat. In some places, they are even known as polecats, though this is an incorrect designation. They are not members of the cat family at all, nor are they polecats, which are European wild animals.

These are true skunks. The bushy tail can make up a third of their length. Like all members of the skunk family, more properly the weasel family, this skunk does have scent glands and a means of delivering a powerful and disagreeable odor if they are threatened, through a gland near the anus. Still, they don’t have a lingering smell like a striped skunk and don’t take a defensive stance easily.

We once had a spotted skunk enter our forested camp in lower elevation mountains, late one night, but we wouldn’t have even known it was there had it not been for rustling in food sacks as the skunk was rummaging for food. There was no odor, and the animal was unconcerned about us, though we were invading its territory. 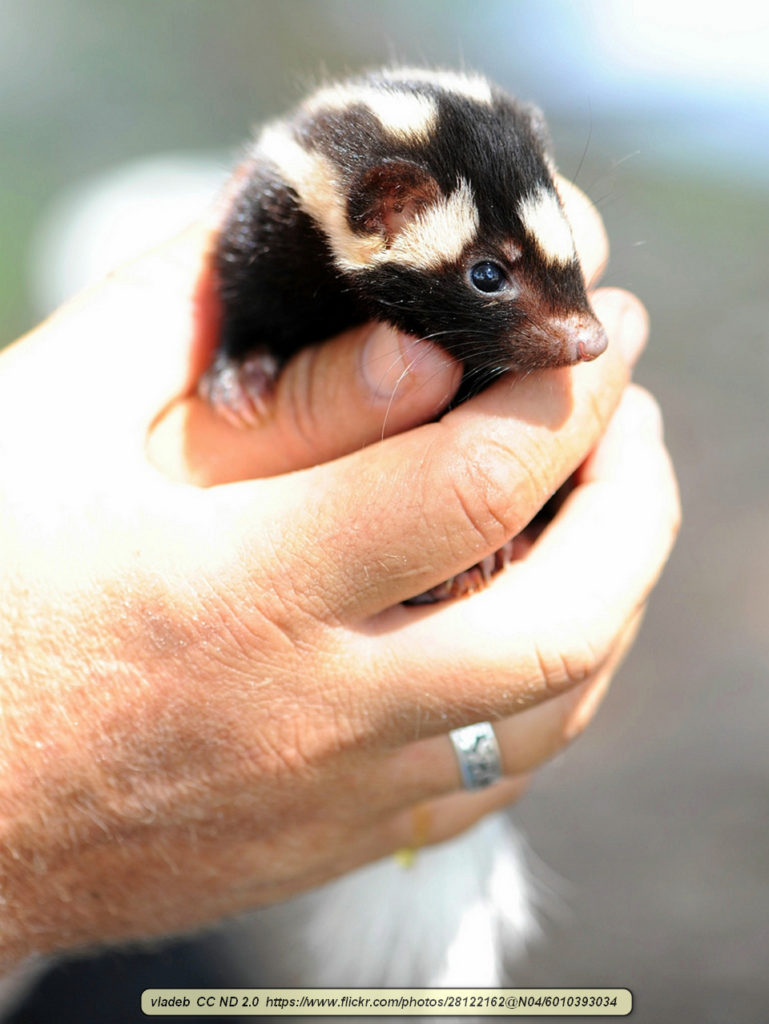 Spotted skunks are mostly nocturnal, but they will sometimes make a foray during the daytime, soon returning to their burrows, which are normally hollowed out tunnels in the ground. Once in a while, they will nest in hollowed out trees, but this isn’t common.

These skunks are found in varied terrain, from lowlands to hot dry areas and into mountain forests. They can withstand a large temperature range and their food is just as diverse as their habitat is.

A spotted skunk is a skillful predator and they are adept at hunting small rodents, snakes, and insects. They’ll also fish in shallow waters for fish, crustaceans, snails, and amphibians. These skunks are good climbers and will eat birds and bird eggs. Not only do they possess good hunting prowess, they also have a sharp set of teeth to catch, hold, kill, and devour prey.

Like their stripped cousin, they have few problems with eating occasional other foods, like grains, nuts, seeds, and berries. These foods don’t form a staple, yet it is easy to see why spotted skunks are so wide-spread, with such a broad diet. It should also be mentioned that they have little fear of humans, though they are timid creatures by nature. They will happily raid a campsite where food has been left out. We actually and purposely left food out for the skunk that visited us, every night following the first visit. The food that was left out was always gone by morning, but the little skunk stopped getting into our food supplies.

If spotted skunks are adorable, their babies are even more so. Three to eight pups arrive in mid to late spring and again look a lot like kittens. The mothers are quite protective and may face off much larger predators in their defense. If she isn’t getting the attention of those predators, even after stamping her front paws, when she turns around and lifts her tail, the predators often take flight. These skunks are quite accurate with their spray within 8-12 feet. 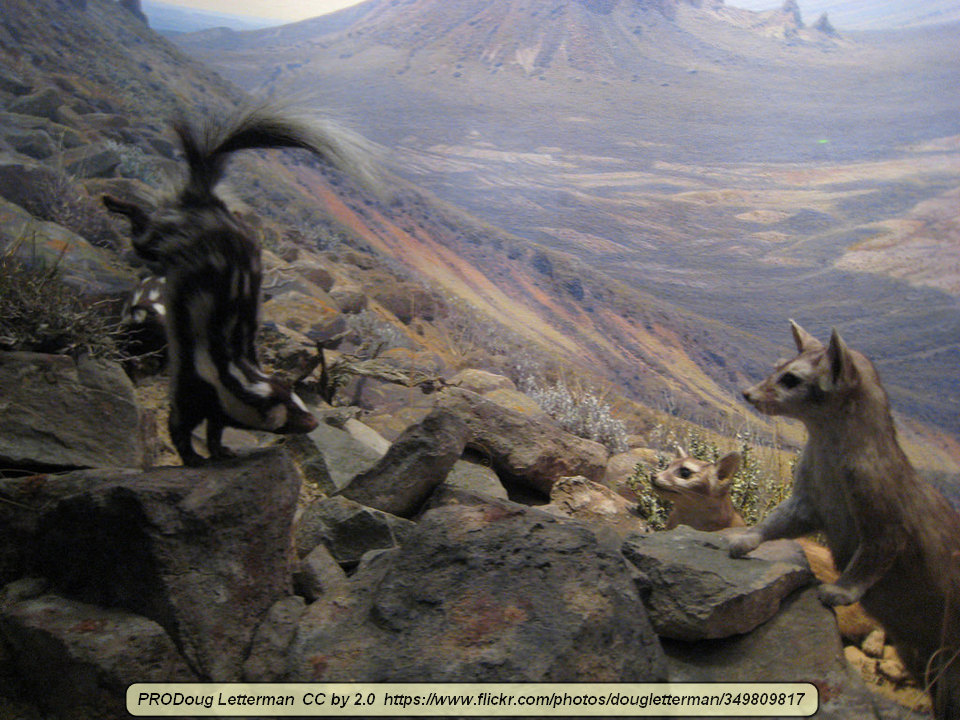 Spotted skunks are also the acrobats of the skunk family. They can walk on their front feet, with the rear ones in the air and can maneuver in ways that are amazing to watch. For this reason, they are sometimes kept as pets, though it should be noted that they are also naturally curious and will find ways to get into almost anything. Still, with a pet skunk around, there will seldom be a problem with house mice. Not even house cats can match a spotted skunks ability to catch mice.

Spotted skunks are beautiful little animals that do more good than harm. It is hard to know that one is even around, because of the normal lack of heavy scent, which striped skunks are known for. They are easier to tame than most wild animals and even in the outdoors, it is unusual for a spotted skunk to cause problems.

I hope that those who love the outdoors are lucky enough to have an encounter with at least one spotted skunk in their lifetime. They will long remember this treasure, fondly, in their memories.