I used to own a dress shop with a girlfriend. One day I came to work, and there was a brown tabby cat hiding in the back room. “What’s with the kitty?” I asked my partner. She said that she rescued it from her daughter, who had had it for a year, but had gotten a dog a few months ago, that totally terrorized the poor cat. She said she could not bear to see this situation go on, so she was going to see if she could find it a home. I knew she could not take it home because she had a grumpy cat and a spastic terrier, so I agreed to let her stay in the store till a home could be found.

A month went by and we could not find any takers for the poor little thing. It was still hiding in the back room, and rarely came out. I felt so sorry for the little thing that I decided that I would adopt her. Needless to say, we had a heck of a time getting her in the cat carrier, but I finally got her home. My husband opened the carrier door and reached in to bring her out. She struggled and struggled, it was clear she was terrified but my husband held on to her, trying to show her that he was not going to hurt her. That was when we found out she had no claws at all, all four feet had been declawed. We were horrified, but my husband relaxed a bit when he found out that he was not going to be shredded. She became more and more upset, and suddenly she peed all over my husbands shirt. The look on his face was priceless! I told him to put her down, which he gladly did, and grumped off down the hall to wash up and change his shirt.

Thus began 5 years of being avoided by this little kitty. She was more than happy to eat the food we put down for her, but if you came near, she would run off. She was not hostile at all, but she was completely antisocial. I figured she would come out of it in time, but as the months passed, nothing changed. After a year, we just figured that she would never get over the trauma that she suffered at the paws of that dog, and we accepted it. We left her alone and did not try to pick her up or touch her. We still talked to her gently and played with her with a stick that had a mouse on the end of a string, but other than that, we let her be. 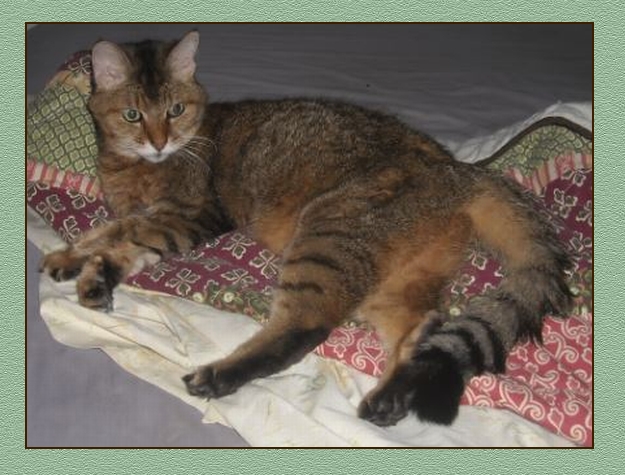 Five years passed, and one day I was sitting on the couch with an afghan covering me, watching TV and she just jumped up on the couch and walked right over to me and laid down in my lap!!! I almost fainted. Ever since then she has been very loving toward me and will let me pick her up and hold her and she sleeps in my lap in the evening while we watch TV. It took her 5 years, but she finally learned to trust me. Unfortunately, she is still very skittish around my husband, though not as bad as she used to be. There have been no further peeing incidents, for which my husband is grateful. I told him that she would come lay in his lap in another 5 years…..if he was lucky.

Cats, or any animal that is terrorized by other animals or people, can take a very long time to get over it and learn to trust again.  Some never do, but most will.  The trick to it is to do exactly what we did: leave them alone, while providing them with food and shelter, and interact with them in any way that they are comfortable with, in our case we played with her in a way that she did not have to get too close to us, with a mouse on a string. Talk to them softly and never force them to let you pick them up or touch them.  Let them decide when they are ready for more intimate contact. Be prepared to accept it if they never do.

If you have ever wondered if it is wise to rescue a pet, believe me, it is. Chee is a very loving cat now, and we are happy that she learned to trust us.  It was worth what it took to get her to this point and we have a happy life together.

If you liked this article, you may also like this one: