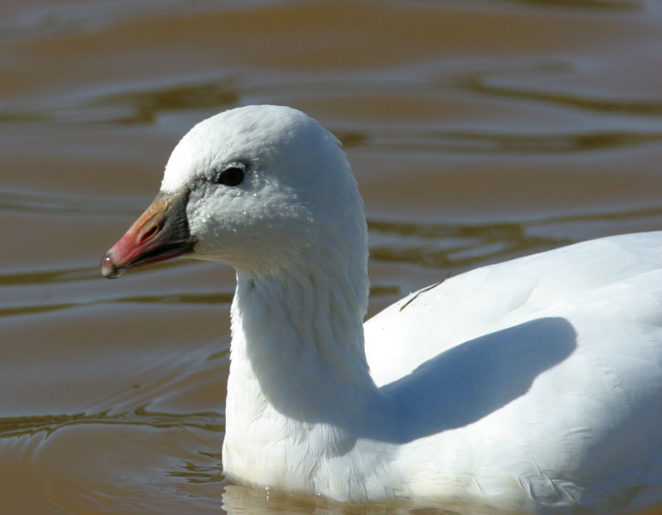 The snow goose (Anser caerulescens) is a rare visitor to the British Isles, although lone individuals are sometimes seen in Ireland and Scotland in winter. The brilliant white plumage of the snow goose makes it stand out in a flock of other wild geese.

These visitors generally arrive by accident having been blown across the Atlantic by strong cross-winds during their annual migration down the east coast of North America. Some individuals may be escapees from captivity or wildlife reserves.

The snow goose is between 25 and 30 inches (64-76 cms) in length and entirely white apart from black wingtips and some pale grey plumage on the back. The bill is red. There are two distinct races of snow goose – the greater and the lesser – and the lesser has two varieties, the white and the blue. Blue snow geese are not so much blue in colour as grey and black apart from the white head and neck.

There is no difference in appearance between male and female snow geese.

The snow goose has a somewhat harsh “kaah” call.

They feed on grasses, grain and water plants.

They live and breed mainly in the Arctic Tundra, their habitat being marshes, wet grassland and stubble. They usually roost on water.

(The photo is not by me – so I deserve no credit for it! It was taken from a copyright-free source)