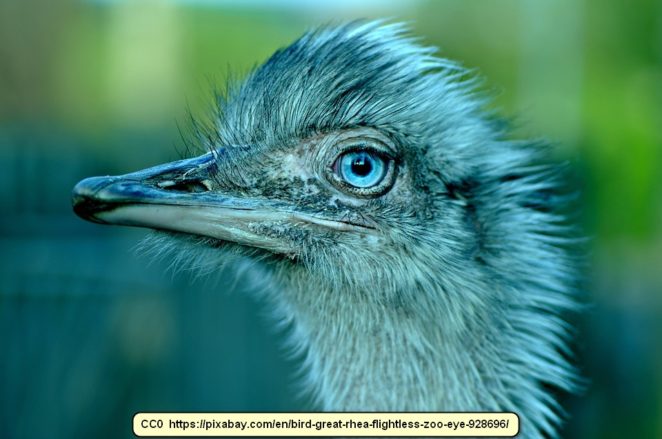 There is somewhat of a trick in calling this the flightless bird of America. While it really is exactly that, people have a tendency of forgetting that South America is still America. The common rhea is found, in fact, in the southeastern portion of South America, from Argentina and Brazil through Uruguay and Bolivia.

The bird is usually considered to be in the same order as the ostriches, emus, cassowaries, and kiwis, though many zoologists believe that the birds are actually not related and are simply examples of parallel development. That is when animals that are unrelated take on the same characteristics to fill a niche in different locations.

There are many examples of parallel development, one of those being a comparison between a hyrax and a marmot. Marmots are large rodents and the largest of the squirrel family. They are found in America. Hyraxes are not rodents and are actually related to elephants, and they are found in Africa and the Middle East. Yet the animals look much alike, they are about the same size, with the same coloration and they eat the same foods. They are totally unrelated, yet they have the same habits.

So it is with the rhea. In appearance, it looks very much like an ostrich and many of the traits are the same between the two birds. Yet, they are not the same birds and some scientists claim that the two are actually unrelated, even though one could easily be mistaken for the other.

A rhea is a large bird, often weighing in excess of 50 pounds and standing over five and a half feet tall to the top of its head. In comparison, the ostrich, which is found in Africa, commonly weighs 200-250 pounds or more and stands up to seven feet tall.

Rheas are brown to gray, with feathers that look rather fluffy. Their feet have three toes, with no toes at the back of the foot. Ostriches have only two toes. Both rheas and ostriches have surprisingly long wings, which they use as a counter-balance when running, often sticking one out as they turn. This gives them both great agility and the ability to change directions easily, even when running at high speed.

Rheas, and ostriches as well, lack a keel on the breastbone to which flight muscles would be attached in birds that fly. It is for this reason that rheas were once thought to be closely related to ostriches, though there are structural differences between the two, such as the number of toes.

Both birds are omnivorous, eating primarily plant food but also eating reptiles, insects and other invertebrates, rodents and occasionally even other birds.

The males become very aggressive during breeding season, however, while dominant males breed with several females, the females also breed with multiple males. What is more unique is that the eggs, which are laid in a shallow depression with several females contributing to the number of eggs in the nest, are then incubated and cared for by the male. He hatches the eggs and cares for the chicks. The eggs usually hatch after an incubation of 1 to 1 1/2 months, and one clutch of eggs can number up to 80 eggs or more, though the normal number is less than half this many.

An average egg weighs a little less than a pound and a half, which is substantially smaller than an ostrich egg, which typically weighs over three pounds.

An adult rhea has only three predators to be concerned about; Jaguars, Cougars, and Man. They are said to have good tasting flesh and it would be surmised that they taste rather like ostriches, which are sometimes bred for food purposes. Indeed, rheas are also raised for their meat. Additionally, a breeding population of rheas has been established in Germany.

Rheas are listed as near-threatened and their numbers are declining in much of their range, primarily due to loss of habitat as more land is converted to agricultural purposes. These birds do grow extremely fast, though, and reach adult size in a little less than six months and are sexually mature in a little more than a year. The typical lifespan of a wild rhea is a little more than 10 years, which is much less than that of ostriches, which can live more than 40 years.

The rhea is America’s flightless bird, sharing many of the traits of ostriches. However, they are distinctly different than ostriches. Still, nearly everyone knows what an ostrich is. Did you know that America also has a large, flightless bird?