Last weekend I was sitting here panicking on and off. Money was running low. I hadn’t worked since we got the Shelter in Place Order on March 19th. All non essential businesses were closed, and dog grooming was one of them. I live with my 97 year old mother taking care of her. Which isn’t much, she is super spry. She has Dimentia, and is a bit forgetful. All I basically do is keep her meds straight and clean and cook for her.

We have no problem paying the basic bills and food, but had no extra for anything else, and my car’s engine broke a week before the Shelter in Place order. I decided to hold off on getting another car until we found out how long this would last. Good thing I did.

So, here is where I got the idea to groom from home. Out of necessity I felt I had to do something. Half of the country is opening back up even with the virus climbing each day. Our governor of California stated he will not open until we have had a steady decline in cases of the virus reported for at least two weeks.

Here are our numbers, and take in mind that we do not have testing for the general public. Only those with symptoms bad enough to seek medical treatment get tested.

On May 1, the county of San Diego issued a face mask ordinance. You have to wear a mask while outside in public. If you are caught without one it will be a $1000 dollar fine.

So, with all this going on, I knew I had to do something. I put an ad on craigslist stating I am grooming from home. One on one grooming, start to finish. I don’t want people to meet each other at the door or their dogs coming in contact with other dogs. I ordered an antiviral spray and spray everything down after each dog. I thought I would get  a few calls because in two months all those tiny fluffy dogs are starting to get matted, causing health problems. I never even thought in my wildest dreams I would be this busy. The first week I have groomed 22 dogs.

Here are two of those dogs. These are senior pets, the white one was 14, and the black one was 12 years old. They were very matted, and felt so good after that they ran around like pups. 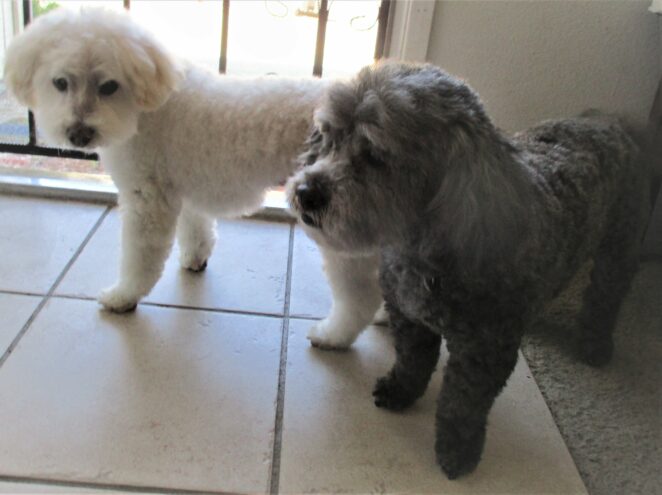 Waiting at the front door. 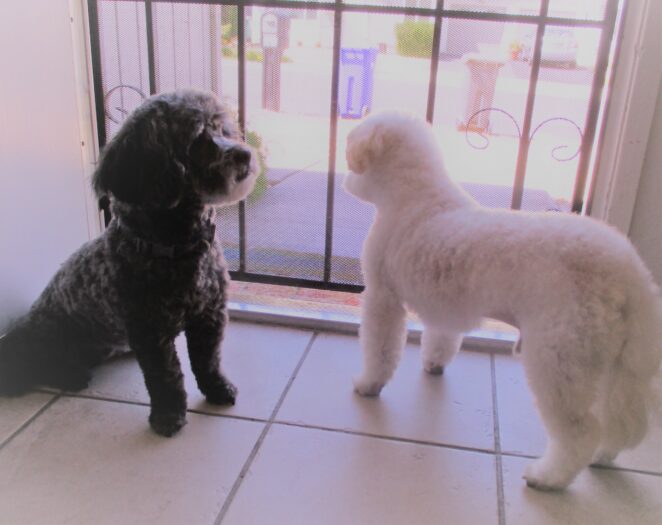 All the dogs have been super good. I have only had one biter, and he was just afraid. After I calmed him down he let me groom him, with no teeth involved.