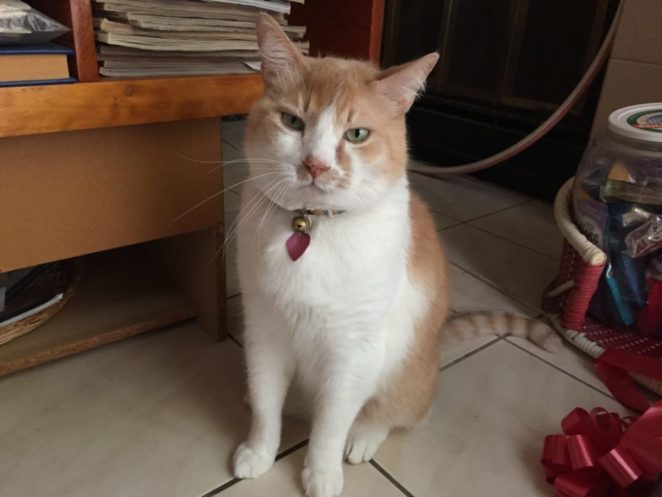 I woke up late today, around 1 pm. I worked on another page for my graphic novel, and when I finished coloring it, I noticed the time was 5:55 pm. I decided to go on the internet for a break.

At around 9:30 pm, while browsing on the internet for a while, I decided to go to the kitchen. I noticed a mouse running fast on the counter. I called out for Gumby PI, thinking he is probably upstairs, hanging out in his 6-foot cat tree. As I walked into the living room, looking for Gumby, I stopped in shock to noticed two dead mice in the middle of the living room, like a CSI murder. One was laying on his side, and the other one looked like just a tail without a body. There was some blood smeared on my tile floor, along with a couple of ants in the area, enjoying themselves like vultures. But I didn’t see any chalk mark around the dead bodies.

I looked around for Inspector Gumby, PI, and I finally found him sleeping on the couch. I wanted to ask him what time he killed the two mice, but he looked like he was enjoying his nap and sweet dreams. Apparently, he had killed them together because the two mice lay dead, a couple of inches apart. And, one was mutilated.

So far, Gumby has killed 5 mice. I wonder how many are left. I also have two HOLD & RELEASE traps—one in the kitchen and one inside the storage closet; and, they each have a tablespoon of organic and non-GMO peanut butter, but none of the mice have fallen for that yet. They are better off going inside the traps because I would have let them loose somewhere outside; but, I guess, these mice appear to be stupid mice, preferring to play Russian roulette with Gumby, PI.

I need to give Gumby, PI some treats so that he continue with his good work and get all of them soon.

Meanwhile, I got some paper towels, picked up the dead bodies, and placed them inside the trash body bag, before taking the trash bag into the trash bin in the garage, and then I took out the trash bin for trash pickup on Friday morning. I then wiped the CSI floor area with a spray of Clorox and paper towels.

I decided to clean most of the kitchen because of this CSI murder case. I just need to mop the floor and take some old pots I want to donate into the garage. I will probably do it sometime this weekend.

This is Gumshoe Gumby, PI