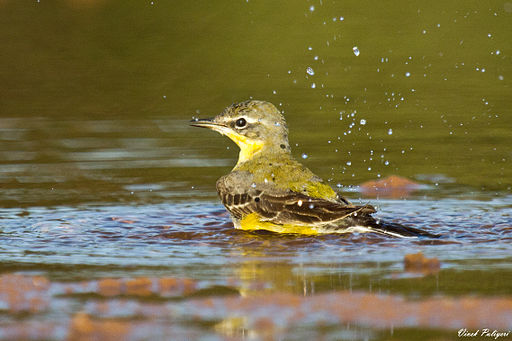 The yellow wagtail (Motacilla flava) is a slim and graceful bird that is recognisable from its bright yellow summer colouring and its characteristic running movements with tail and head wagging.

The yellow wagtail spends its winters in tropical and southern Africa and its summers in Europe, where it can be seen virtually anywhere except Ireland and Iceland. In the United Kingdom it is found mostly in England (apart from the far southwest) and eastern Wales. Its habitat is mainly water meadows, pastures and boggy moorland. It is often present where cattle are grazing, as it likes to feed on insects that breed in cattle dung, although not exclusively so.

Loss of habitat would appear to be the main reason for the decline of yellow wagtail numbers in Great Britain since the 1980s, which is why the bird is on the red list of endangered species.

The yellow wagtail is some 16-17 centimetres (6.5 inches) in length. Males have bright yellow underparts in summer, and are yellowy-green on top. The colouring of female yellow wagtails is less bright, with the green colouring tending more towards brown than on the males. In winter, male yellow wagtails more closely resemble the females. The legs are black.

There are a number of distinct subspecies of yellow wagtail, with the differences being most clearly seen in the colouring of the head feathers. The most common subspecies seen in the United Kingdom is “flavissima”, which has a bright yellow forecrown and supercilia (stripes above the eyes) and is yellow-green on the main crown and cheeks. Other varieties include blue-headed (“flava”), grey-headed (“thunbergi”), black-headed (“feldegg”), ashy-headed (“cinereocapilla”) and white-headed (“leucocephala”).

The yellow wagtail has a markedly undulating flight although it spends most of its time on the ground, walking or running with tail wagging and head darting to and fro. It will sometimes flutter into the air or perch on a fence, wire or bush. When not nesting, the yellow wagtail is a gregarious bird and it will roost communally, with sometimes as many as a thousand birds flocking in reedbeds near ponds and lakes.

The yellow wagtail has a loud “twee-ipp” call and a short irregular warble.

Yellow wagtails return to their breeding grounds in late March or early April, when they form smaller flocks that later break up as pairs form to establish nesting territories that are vigorously defended by the male birds. A nest is built by the female yellow wagtail on the ground in May or June. This comprises a structure of grass stems lined with soft material such as animal hairs, wool or feathers. The whole construction will be concealed in a clump of grass that acts as a roof.

Four, five or six eggs will be laid, these being incubated by the female alone for up to 14 days with the male standing guard close by. Both parents feed the young, who leave the nest after about 10 days although they will continue to be fed by their parents for another two weeks or so before they fledge. A second brood is often raised. They leave for their winter quarters in August or September.

(The photo is not by me, but has been taken from a copyright-free source)