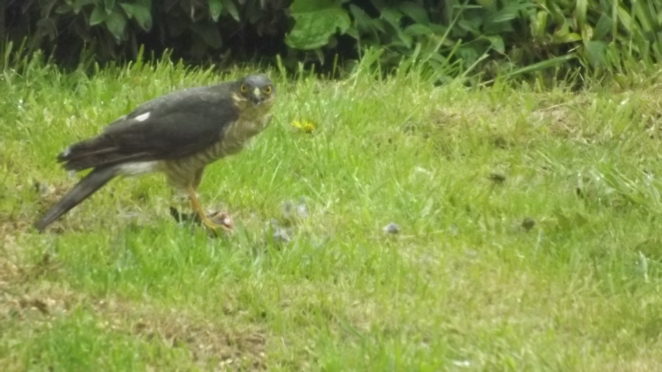 When the Great Exhibition was staged in London’s Hyde Park in 1851, the enormous glass pavilion, which became known as the Crystal Palace, enclosed several large trees. These were home to a large number of sparrows and other small birds that caused a nuisance as they flew about and deposited their droppings. Before the exhibition opened to the public, so the story goes, the problem was brought to the attention of Queen Victoria, who was aware that the usual method of bird control, namely blasting away with shotguns, was unwise inside such a structure. She asked the elderly Duke of Wellington, the hero of Waterloo, for his advice, which he gave with the words: “Sparrowhawks, Ma’am”.

Doubts have been cast on whether this story is true but there is little doubt that sparrowhawks would have had a devastating effect on the sparrows trapped inside the Crystal Palace. The sparrowhawk is the most feared airborne predator that the average garden bird is likely to encounter.

The sparrowhawk (Accipiter nisus) is resident right across the northern temperate zone from Spain to Japan and is also found in North Africa and parts of south-east Asia. Its habitat is well-wooded country with a preference for coniferous trees.

The sparrowhawk is a fairly small bird of prey at up to 15 inches in length, but females are noticeably smaller at around 11 inches.

Male birds have slate-grey upperparts with tail and wings being browner with dark bars. The underparts are reddish-brown with bars.

Female sparrowhawks have much browner upperparts and whitish underparts with reddish-brown flanks. There is a white stripe over the eye.

The legs, upper bill and eyes are yellow, whereas the lower bill is dark.

Sparrowhawks fly fast and low, alternating three or four wingbeats with a long glide. They are adept at weaving between trees. They will also soar into clear air with the tail outspread, especially as part of their spring display.

The alarm call is a repeated “kek kek”; whistles are heard during displays.

Sparrowhawks feed on smaller birds, which are taken by surprise or outflown. Birds that are young or injured are at greater risk of being preyed upon. Small mammals and insects are also eaten.

Breeding takes place from the end of April. The nest comprises a platform of sticks. The clutch of four to six eggs is incubated by the female for around 35 days. The male sparrowhawk brings food to the female which she then feeds to the young, which fledge at anything from 24 to 30 days.

The question has been raised as to whether sparrowhawks are a good or bad thing as far as local bird populations are concerned. As mentioned above, adult, healthy birds only form a small proportion of their food, and it must also be remembered that a pair of sparrowhawks will hunt over an area up to five kilometres in diameter. It can therefore be seen as a sign of a healthy bird population if there are sparrowhawks around; if they could not sustain themselves they would not be there.

(The photo is one that I took in our own back garden a few years ago. I saw one just outside our kitchen a few days ago – but I didn’t have the camera on me at the time!)