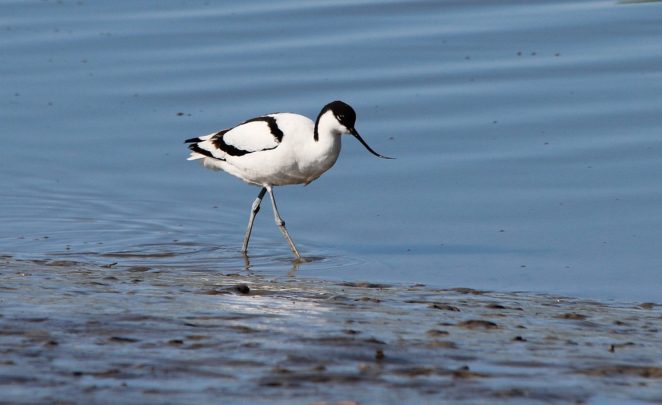 The avocet (Recurvirostra avosetta) is a wader that inhabits shallow waters in creeks, estuaries and coastal lagoons. It is fairly common on the coasts of continental Europe, both north and south, but had been absent from British waters for around a century before wartime conditions (1939-45) gave it a chance to re-colonise. It now breeds in quite large numbers in the UK, particularly in south-east England at places such as the RSPB’s Minsmere reserve in Suffolk. Large numbers have taken to wintering in suitable places along the south coast, particularly Poole Harbour and the Exe estuary in Devon.

It was this conservation success that led to the avocet becoming the logo of the RSPB (Royal Society for the Protection of Birds).

The avocet is a large wader, up to 45 centimetres (17.5 inches) long, with long blue-grey legs and a very distinctive long bill that turns up at the end. The body is mostly white, with black on the head and nape of the neck. The wings are black and white, which gives the bird a piebald appearance when walking or in flight. Males and females have similar plumage. When flying, the legs trail behind.

The avocet feeds mainly on small water creatures such as crustaceans that live in the mud below shallow, brackish water. The avocet stamps its feet on the mud to disturb the creatures, which are then taken by the bird as it sweeps its bill from side to side as it steps forward, looking not unlike someone vacuuming a carpet. This highly unusual feeding method accounts for the shape of the bill, the “business end” of which is parallel to the mud surface as the avocet feeds.

However, avocets can also feed in deeper water, upending themselves like ducks or taking food from the surface. When food is plentiful, many birds will gather in large flocks in the shallow water or on mudflats.

Avocets also tend to breed in colonies, although these are generally not particularly large or dense. Pairs form after an elaborate mating display, and both birds prepare a nest consisting of a depression in the grass or mud close to the water’s edge and lined with a small amount of grass or twigs. This nesting behaviour is one reason why avocets need protection in order to survive in areas close to human habitation. A motorboat speeding close to the shore could easily swamp a nest, but then so could an unusually high tide coupled with storm conditions.

Avocets lay three or four eggs, one or two days apart, any time from mid-April to late June. Both parents incubate the eggs, which take up to 25 days to hatch. When hatched, the chicks are mobile within only a few hours and are able to follow the adult birds into the water and start feeding for themselves. However, they rely on their parents’ protection for a long time, even after they have fledged at around 40 days.

Another reason why avocets have found it hard to maintain their populations is that many chicks do not survive to adulthood, particularly if food is scarce or there is bad weather at the wrong time. Avocets may lay a second clutch of eggs if the first is lost, but not if the chicks, once hatched, fail to thrive. Given that the birds only breed from the age of two years, and the average lifespan is seven years, that does not give the birds many opportunities to increase their numbers if broods are lost in successive years.

One factor that may help avocets, and other wetland birds, to continue to increase in numbers is the policy of allowing sea walls in parts of eastern England to be breached and for formerly reclaimed land to return to wetland status. The creation of avocet-friendly environments should ensure that this attractive and unusual bird will still be around for future generations of bird-lovers to marvel at.